the sentinels at the gates 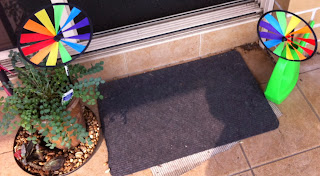 The sentinels at the gates.  This sounds as if it should be something from perhaps the The Lord of the Rings or even something from Kenneth Grahame's The Wind in the Willows, along the lines of the chapter headed "the piper at the gates of dawn."

Not so.  These are the beginnings of my bird defences.  I get quite a bit of breeze on my balcony and these spin merrily around.  They cost $1 from KMart and I'm on the lookout for a couple of rubber snakes to add as well.

I love birds out in the wild.  I can cope with birds in cages although I don't like to see them.  I cannot cope at all with birds on the loose flapping around me.  I would not say I'm scared, I just hate the flapping and the flutter.

When I first moved here, there were lots of horrible mynahs, commandos as my mother would call them.  There are very few lately and they haven't bothered me.  I think the cockatoos have conducted a war of attrition with the mynahs although they do not compete for food.

There has been a young pigeon several times on my balcony lately.  Even when the door was shut, it would come to the glass and peer in, sometimes several times in five minutes.  A couple of days ago, I cleaned the doors with window cleaner and a paper towel.  The smears had been bothering me for some time.  As the weather was cooler, I left the door open  about 12-15 cm.  I left the room and when I returned, there was a pigeon on the kitchen floor.  It certainly looked like the one  from earlier.   It took off to fly out.  However, it had hopped in through the barely open door and couldn't find its way out.  It kept flying at the glass and was getting quite frantic.

I retreated a bit and it landed on a knitting book on my table.  Fortunately that was all it did.

I edged past and slid the door open wide and then retreated.  I waved my arms and it took off again, this time escaping.  I don't want the doors closed all the time so have been thinking what to do.  There should be a screen on the door but there has never been one.  Insects are not a problem and I really don't want to spend quite a bit on a custom made screen door.  I see there are other apartments with no screen.

I was in KMart yesterday and saw these, so the first line of defence has gone up.  As I mentioned, I think several rubber snakes moved around frequently on the balcony may help too.  I have to find those.  The pot plant holding one of the wheels is salad burnet which I was given.  It's a pretty plant, light and feathery.  I don't find the leaves anything I would bother with normally, but I add them to salads, a vague cucumber flavour.

You can see the queer light.  It's the sun through  smoke.  I can only just make out the shapes of the city buildings.  More back burning is being done today to help contain one of the fire fronts. I am utterly amazed at the those who go deep into the mountain valleys with a pack, some firefighting rakes, drinking water and chainsaws and not much else.  They work on spot fires and also on burning ahead of fires.

My eldest son works at a very high level in a government department.  I know how high it is by the names he mentions for meetings, regardless of the colour of the government.  Often one day a week at the office, then other days as he is able at home with the bad back and bone infection.  He was in Springwood  the other day on the mountains, setting up an office to arrange  emergency accommodation for fire victims.  I assumed he would be home the next day at his MIL's place which has had several more scares from grass fires.

He had been catapulted into an extremely responsible, behind the scenes, admin type position with responsibility over-arching over several groups of fire connected entities.  He's working at the headquarters where the heavy work is done at Regentville, near Penrith, making sure they work together and don't pull in any group's direction.  I know more but really can't say publicly.  I asked him how he felt.  He said he would not have chosen the role but was selected because of both his IT knowledge and his managerial experience, along  with the connections over a wide area which he could bring in to help.  "Someone had to do it, and I can, and will do the job properly," was his comment.

Further to my comment about The Wind in the Willows...  I turned the TV on one afternoon for an update on the fires.  I happened to catch some of the show that terrible Eddie McGuire hosts.  (I wish someone would go over strange word and names with him before the show starts.  He has no idea of pronunciation of many names and makes a fool of himself, unknowingly and all too often.)  One question had four choices for the author of that book.  All known names, well certainly to me.  The contestant, a man in his 30s, ummed and aahed, scratched his head, pulled an ear and more.  He had heard of no names and did not know of the book.

My sister still has Mum's copy which I had probably read ten times before high school.  Then I realised how many questions I could answer from that show, basically because I read and have always read and I pick up much information that way.  Modern pop music questions stump me, but I get most of the others.

Clicking on picture will enlarge it and the feathery salad burnet leaves can be easily seen.
Posted by Jan at 11:17 am

We have trouble with wattle birds and starling, they come inside. And doves and pigeons. Maybe I should get some snakes and windmills too. I know that exact chapter from WinW. I remember the line drawing in the book my mum and dad gave me. I always thought of a faun. I am also amazed at what people don't know, but then I never know modern music things either, or sport, but ordinary facts that everyone should know.
I hope your son is feeling OK???

I hope the "war of the birds" is going in your favour.

I had no idea your son held such an important position; I think I assumed he wasn't working because of his back pain.

Like you, I'm stunned at people who go on that show but seem to have no basic general knowledge!