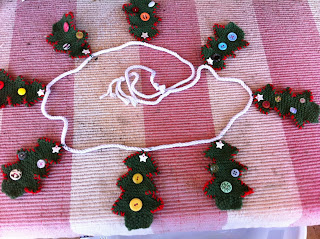 I spent one of the hot mornings recently quietly stitching the red Heirloom baby wool around the eight little trees I had knitted.

My fingers didn't like it much and cramped up so I rested them a bit each time I finished a tree.

I enjoyed picking out the vintage buttons from a box given me by a friend.  I had many hundreds more I could have chosen from, but found enough in the ones which had been added to a plastic container. My guess is that the old bag they had been in had broken and I had just dumped them in with some other stuff.

The stars at the top of each tree are mother of pearl which I bought from the the Crewel Gobelin in Marian Street, Killara when I lived there.  I used to walk past it twice a day and many purchases were spur of the moment when I was tempted by the window display.   I bought several designs of mother of pearl buttons  and have now just about used them up.

I had been planning on crocheting a chain of the red Heirloom yarn, but in my hunt for buttons, I found the cord, part of some bought as a drawstring tie some years ago.

The only outlay on these little trees has been time.  All the materials have come from stash and I guess is that some of the  buttons are quite old.  Some are fairly utilitarian, some are shirt buttons, but some are definitely old.  The cord will go across my door with a slight curve and I'm looking forward to putting them up.  They've been a fun project.
Posted by Jan at 3:17 pm

Du grünst nicht nur zur Sommerzeit... usw. You made me sing along, we learned this in German at school!!! I love your tree garland or bunting. Bunting is very trendy. What a bonus that it is made from stash. It is so pretty!!

Well done you. Some handmade Christmas cheer and it's still November. I'm trying not to think about what day it will be in five weeks -- and our Christmas will be over three days before that!