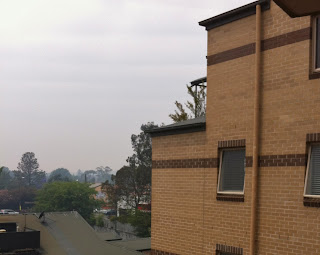 Some years ago, probably around eight years, I took part in a series called Saturday Sky.  It was interesting picking different skies to photograph and finding frames for the photo as well as externally applied frames.  I look back through my photos and remember taking some of them especially for the Saturday Sky series.

Today there is another example.  Much of Sydney and the Central Coast has been blanketed in smoke today, much of it from  backburning before a forecast very hot day tomorrow.  The fires are contained but are not extinguished.  They could burn for weeks in deep mountain valleys unless we get substantial rain.  Then,  if wind  and temperature combine as fires need, they roar up with little warning in a different area and the nasty cycle begins again.

This photo which can be enlarged by clicking on it, shows what the sky was like here just after lunch.  The closest suburb here is about ten minutes' walk away if I were capable of walking that far.  I'm not at the moment.  I can barely see it.  The next suburb is obliterated by smoke and the harbour bridge and city skyline of major buildings is just totally hidden.  I've been inside most of the day with the doors and windows closed.  I've sneezed many times.  I don't want to think about those who really have respiratory and related problems.  According to the Ambulance Service they have been rushed off their feet attending to severe asthma attacks and other problems caused by the smoke. 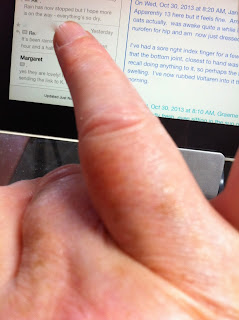 I've been doing socks for a while now in a KAL in a Rav group.  I at first said I would do one pair.  I'm now on my sixth and others have done many more.  I don't usually put expectations on myself as I find it a  sure way to disappoint myself.  However, the socks have been started and finished in a reasonable manner.

The second sock in the sixth pair was to have been finished by the end of October to fit in with my calculations.  The arthritis has flared again, see comment about walking above.  My thumb on right hand often is swollen and can not be bent much off the perpendicular. That happened last week but worse was the swelling of the ring finger on the same hand.

It was so painful that scraping it on mattress as I turned in bed woke me up.  The knuckle was bruised from the swelling and the whole of the joint closest to my hand was very swollen.  I've been rubbing cream into it several times a day and it's a bit better now.  However, knitting was totally out of the question, so the second sock is still only about 30% finished.

The photo shows the swelling in the one joint.  The joints above the swollen one are fairly normal.  My right ankle is also swollen.  When the osteoarthritis was first diagnosed years ago, the doctor prescribed tablets to be taken all summer.  I don't want that, I hate the effect on stomach, but I need to get something to have in the house.  I have to get a repeat script for another medication so will raise this matter when I go.

I did not realise just how difficult it would be to get a photo of this.  Son still has my Nikon and I had to use my left hand and phone to take this.  Clumsy, very clumsy and awkward.

I just had to  edit this photo.  I realised my brother's name was clearly visible  in the inbox on the left.  A very private solicitor, holding top government positions, he would have been horrified to see his full name there.  Once I realised it, I couldn't leave it, although I doubt anyone who knew him would ever have seen it.  I've edited the photo.

I would definitely talk to the doctor. There are new meds coming put all the time. I'm on a newish one for osteo in my knee that doesn't seem to have any effect on my tummy. Being in pain puts other strains on the system and tires me out, and I try to avoid it as much as possible.

Oh you poor thing, that looks so painful and horrid. I hope there is some better medication available for you.
I remember Saturday Sky. We are lucky not to have had any fires here yet, but we had the wettest October ever, so a few dry windy hot weeks and we will be on alert.

I hope the arthritis has settled now and the doctor was able to help you find the right meds.