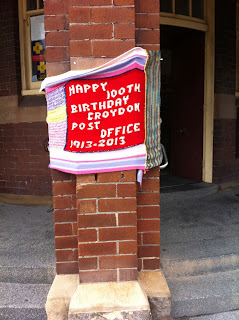 I went to the doctor on Friday and saw this.  Croydon is an old suburb, probably 150 years old but the Post Office is now 100 years old.  The building is still the PO but the inside is split between PO and a pharmacist.  Not an improvement, actually. The site is in a prominent position on top of a hill at the junction of three roads.

The yarn bombing is both knit and crochet.  The part to the right of the pillar and behind is crochet and the birthday card is done in intarsia, not duplicate stitch.

The doctor I see is behind the PO in an imposing two storey building which was once the home of the Postmaster.  No perks like that these days.

I had saved a list of several things to see the doctor about.  I see the principal of the practice who is very thorough.  However, there are normally four doctors there.  On Friday there were two and he was running very late.  His manner is not affected by this and I know I had his full attention, but the wait was a  bit much.

My blood pressure was fine but he changed the script to something he thinks will suit me better and I will have it checked in two weeks.  I was given several small sample packs of the new tablet to save me buying some.

I spent quite a while discussing the arthritis flare and now have stuff for that.  However, I also need a scan and x-ray of my shoulder as he is sure it's frozen.  It's certainly extremely painful and I don't knit at the moment for more than a few minutes.  I came away from the pharmacist with multiple packs of pills.

Family problems here and I'm not sure what will happen.  Middle son arrived with a suitcase at 11:00 pm on Friday night.  I think we are all hoping for a good resolution of this.
Posted by Jan at 10:59 am

Oh dear, Middle son is lucky to have a great mum. I had a frozen shoulder, it was so painful. I had physiotherapy to help. I am glad you have a thorough doctor. The wait can be long at my GP but she is worth the wait too. I hope the pain diminished. That is great knitting and crochet!!

Oh dear! I get your sons muddled; is Middle Son the one from the Central Coast or is it Mark?

I had frozen shoulder a few years ago and wasn't allow to knit. Eventually, when it was completely frozen, the specialist told me I could knit if I wanted to because it wouldn't do any more damage! I had PT and a cortisone injection. The latter was incredibly painful and I refused to have a second one.

Interesting yarn bombing. Fancy doing all those letters in intarsia!