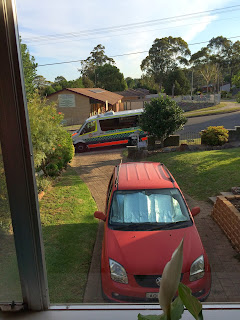 My son came home from hospital a few days ago in this patient Transport Ambulance.  The surgeon required this so he could lie down on a stretcher for the hour's drive.  Unfortunately, it was more than an hour.  The ambulance had been ordered for 10:00 am but didn't arrive till 4:30 pm.  On the way home, they detoured to another hospital to pick someone else up.  By that time the main road west out of Sydney was packed with peak hour traffic.  He was very glad to get home, and has been improving every  day.  A bit of TLC and home cooking will do that.

He sounds great and is taking things slowly but is happy to be pain free in his back and almost that way for his stomach.

He had post-op visit to the surgeon today who is very pleased with  the result of the operation.  He has a plan for rehab to cover the next few weeks before another checkup.

I've always been able to tell how he feels by listening to his voice, even over the phone.  He can't hide tiredness, pain, drug haze from painkillers etc.  It's just lovely to hear him sounding so alert when we speak on the phone.  He probably won't make the Boxing Day meal at his brother's on Central Coast. Too much time sitting in the car is not a good idea.  Last year, he had an impromptu gathering at his big house in Stanmore and youngest son felt it was the Christmas gathering he  had missed out on.  With middle son in a nasty situation, youngest son is returning the favour at his new place with the jetty and great view over the bay.  I am sure DIL needs some professional help.  She's never been easy to get along with and members of the family can tell tales of her attitude.  However, right now, venom and bile just ooze from her.

My sister gave me this  tiny cask made of strong cardboard as  part of my Christmas present.  She made some remark about taking it on a picnic.  I thought it might perhaps have contained a wine glass full of liquid.

When I turned it over, I saw it's not wine  at all, but olive oil from this year's pressing at an olive grove in Goulburn, NSW.  She bought it on her travels this year.  It tastes really good and is fresh and light.  It's now being used at home and I am  enjoying it.  What is also good is that the tap is very good, allowing absolutely no drips to escape.  The cask holds 250 ml and is a rather neat marketing idea for the growers.

I have other pictures I could show but most of them show a very deep, nasty cut which I inflicted on myself several days ago.  I was aware that the knife  could slip but thought I had taken enough care and had positioned my fingers out of harm's way.  Not so, I have a very deep cut running diagonally on top of my left index finger and covering the middle joint.

Of course I was home by myself.  It took me about half an hour to stem the bleeding and when I looked at it I quickly put a  bandaid around it and rang my St John friend who would have happily come over to dress it for me.  Phone didn't answer and he didn't reply to an SMS for some hours.  My son arrived and went straight to the pharmacist where he bought non-stick dressing bandaids, with the same material as the old Telfa wound dressings.  It's healing, but is sore and I suspect went almost to the bone.

When he had finished cleaning it up, he made us each a gin and tonic, possibly my first or second one this year, even at the end of December.  We both needed it.  He's doing OK, but DiL is being very unpleasant.  She keeps putting his stuff on the porch and telling him by text to pick it up or  she will dump it.  She knows this place is small.

As my mother would have said, it's stinking hot here today.  A southerly is due soon, I hope.  I've been following the drop in temperatures up the coast and for me, it  can't get here quickly enough.  Heavy cloud and humidity.  This is the second day like this and last night was almost unbearable.  Friday was the same and I could not avoid going out.  I had a doctor's appointment.  I was fortunate enough to score a seat under the air con outlet in the waiting room.  I had quite a wait.  He's the principal in the practice and was complaining of being very short staffed.  I decided to catch a cab home.  It's actually walkable distance from here, but in that heat there was no way I was walking.  My guess is that it's probably about 45 minutes to walk on a good day.  Unfortunately, every man and his dog wanted a cab and I had a long wait.

I hope you all have a good time at Christmas and enjoy any holiday break.

I hope your finger heals quickly and completely. Great news about Oldest Son. I wish you a joyful and peaceful Christimas.

It has been humid here, but it was 37 in Hobart, that's 100 in the old money. I hope it is cooler now. Ouch, your poor hand, I hope you are feeling better and what good news about your son's back. I thought that was a giant wine cask too!!!
I hope you had a lovely Christmas Day. Boxing Day is, secretly, my favourite though.

Hoping your finger soon heals. Good to hear your news though your family has challenging times. Happy Christmas and a peaceful new year.

I love olive oil,everytime Ive been past the nearest olice grove that sells off the farm I miss out as it late and they re closed,being 6 hours from here its hardly a days outing to go visit,one of those disadvantages of arid living

I love olive oil,everytime Ive been past the nearest olice grove that sells off the farm I miss out as it late and they re closed,being 6 hours from here its hardly a days outing to go visit,one of those disadvantages of arid living