dunking biscuits in the Hawkesbury

Last weekend saw our family gathering for Christmas.  We went again to my niece's weekend property on the Hawkesbury river north of Sydney.  About 90 minutes drive from my place. 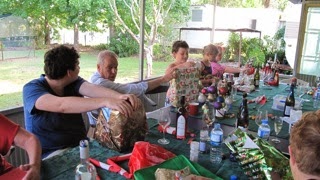 We were there last year and loved the place.  There was a lot of tension around and just as we sat down to lunch there was a huge thunderstorm.  We were right down near the river and had to bring everything back to the house and try to settle.

This time my niece had set up two large tables in the back section of the house, open to the breezes and the view.  It was good to all be at the same table and this time we had insisted on shared food rather than brought  for individual groups.  It was not entirely a happy gathering.  My son was there with my grandchildren but DIL did not attend.  However, everyone made an enormous effort for support for them and the day was generally very good. 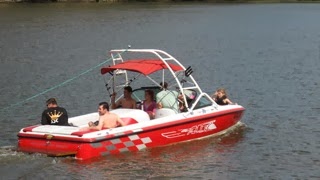 The house is old and has been added to in fits and starts but the big trees give a lot of shade and the grounds were green as they can irrigate from the river which is pumped up to a holding tank and which also gradually fills a well.  The grandchildren had a great time on the quad bikes before lunch.  It was all the two youngest remembered from last year. 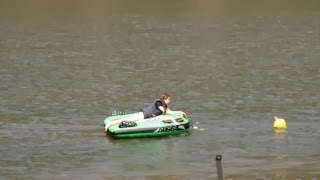 Lunch was pleasant, some BBQ, several of Mum's fondly remembered salad dishes, the famous noodle salad which is well known down here.  Ham and other meats.  One son made her chicken in curry creamy sauce with mangos and cashew.  Another cashew and sultana recipe of hers was popular.

The photos are not mine.  I forgot the camera and with a sore shoulder did not feel like hopping up and down with just my phone.  Top photo shows the rather ramshackle area we were in but it was a good size for us all and for a few extra hangers on who were drawn to the lunch.

More treats after lunch.  A big 4WD backed a boat down the boat ramp, lifejackets were found for the kids to share and they went for rides up and down the river.  Not long each time, it's about ten minutes by boat upstream towards Windsor from Wisemans Ferry and about half an hour around the side of a the mountain on a windy, dirt track.

They each had multiple turns being towed behind the boat on what was called a biscuit.  It looked to me like a softer version of the boogie boards young kids skate around on in the shallows at the beach.  The boat was driven fairly slowly and they all had a ball.  Every one of  them came off it several times but they weren't fussed by that.  They stayed still in the deep river  for the boat to turn around and come back for them.  I think they'll remember this treat all year.  Even Master Eight had a ball and he's not a strong swimmer.

Had I realised this was being taken I probably would not have been too happy.  The shoulder strapping raised lots of questions.  It has been a help, not a cure but it has made things easier by preventing the shoulder joint from moving much.  This stops a lot, not all, of the crunching and grinding.  It's not attractive but I don't think about that at all.  Comfort is more important. 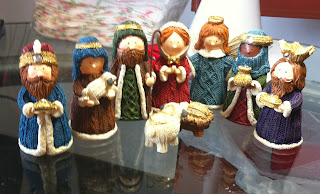 Eldest son is on his way home from the hospital.  Back patients travel by Patient Transport Ambulance, not private cars or taxis.  The surgeon is very happy with the result on the back and the stomach is recovering from the indignities inflicted on it.  Now for rehab and I know he'll work hard at that.

Part of my sister's present to me is this knitted nativity set.  Terrible photo with lots of things  contributing to that.  It's been stabilised but the textures can be seen.  I somehow doubt the amount of gilt there.  It seems to me as if the sheep  near the manger is on steroids.  It's huge.

Merry Christmas Jan! Hope you enjoy the time with family!

Merry Christmas dear Jan <3 Family Christmases are so often an exercise in juggling and diplomacy. so long as a reasonably good time was had by most, I think that is usually the best we can hope for <3

Sounds like a wonderful day, all in all! What a lovely nativity set -- a family heirloom for sure! I hope Oldest Son recovers from his operation quickly and that there is a godly resolution to M's family situation.