it never rains but it pours

What a time over the last two or three weeks.

Youngest son has moved house.  He's sharing with a friend who has his fifteen year old son with him permanently.  A big two level house with five bedrooms, looking over a jetty and a bay on the central coast.  Two flights of stairs down to the jetty and a comfortable bench.  Master Eight is convinced he will supply lots of fish for the household.  I suppose it's possible but I somehow doubt it.  My grandmother was experienced at fishing and the different conditions for different  fish but even she was not always lucky.

There is a decent size kitchen with lots of bench space and plenty of cupboards.  Most of the floors are polished or are tiles so cleaning will be easy.  The best part is a huge covered verandah overlooking the water with plenty of room for a couple of tables and chairs and BBQ.

Last night he rang to  say Miss Thirteen wants to live with him.  She does not get on well with her mother and has no respect for her.  Of course, respect has to be earned and I must  say her mum has not done much there in the last year.  So she moved in last night.  Her best friend lives just down the road and I also suspect the space of the new house has also attracted her.

Middle son is still living with me.  I see any reconciliation as very drawn out.  I feel heartbroken for the children.  Having someone, even a son, land unannounced on my doorstep has been a bit hard to cope with at times.  No problems between us and he knows I will support him despite anything he may have done.  It's just a shock to the system.

One good thing has come out of it.  We cleared the enormous wardrobe in the second bedroom and made him some space.  He found my ball winder which I have not seen for a year.  It is now just where I know it will be when I want it.

Eldest son with the terrible back problems has suddenly had another operation yesterday.  The disc operated on two years ago was degenerating and he was back on the massive morphine derivatives and other painkillers.  Everything lined up yesterday for an operation, otherwise it may have been February.  He hates the drugs so went in to a private hospital.  He has a different surgeon with an excellent reputation.  Today he was up and walking around supported by DIL.  He looks amazingly well for such a huge operation, much better than last time.  He's not impressed with the food he can have, basically jelly and custard.  The operation was done through the front of the body and stomach and gut had to be moved out to allow access to the spine.  A new disc is fitted and the very lowest part of spine has been fused.  The surgeon is very pleased with the result and says he will be taller as spine was collapsing.  He's 6'5".

That leaves me.  I have not done much knitting because of the bad shoulder.  GP sent me for x-rays and ultrasound as he thought it was frozen.  Haha!  Two tendons, one about 2.5 cm across, are ripped right across the tendon and through its depth.  There are problems with the nerve.  Cartilage is destroyed and the ball joint is impacted into the socket.  There are places of very severe inflammation and just severe inflammation in other spots.  And more. And more.  Even I can see that it is in a very bad way.

He says I really need a replacement joint.  I do have a close trusted friend who is  an amazing physiotherapist who lectures overseas several times a year.  She will try gentle exercise  first as she says that can sometimes help enormously.  I remember Spike Milligan's epitaph, "I told you I was sick."  I feel like saying, "I told you it was more than just aches and pains.."

I have knitted very little as it makes  shoulder sore. 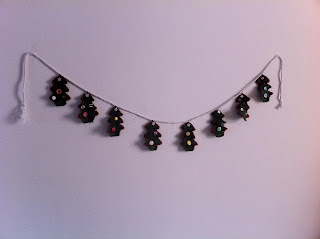 Son was pining for Christmas decorations so I fished mine out.  I have the Art Deco nativity scene but there are six different interpretations of Christmas trees through the place now.

These are the small knitted pines in Grignasco Bambi with vintage button trims.  I should have opened the front door for more light.  They are just inside and the wall is brilliantly white, not the mauve it shows as here.
Posted by Jan at 8:06 pm

Oh no, you must be having all the bad luck for a few years at once. Your poor shoulder, I hope the gentle exercises help, but yes, you did say it was 'quite' painful!!! Hope all the sons are settled/well/happy at least???? Take care!!!

I am praying for your shoulder and for middle son's family situation even as I type this. God bless.