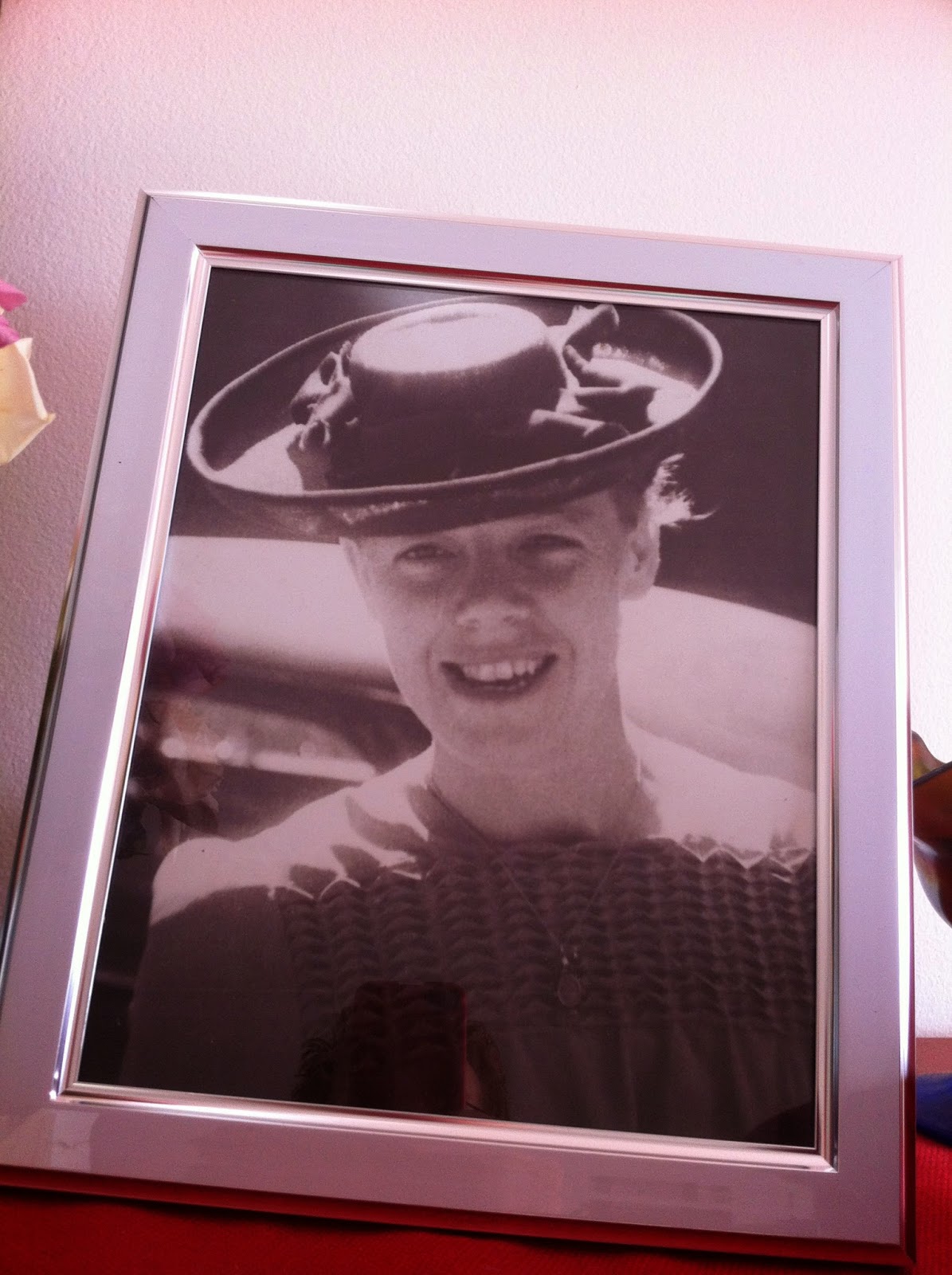 I've seen many posts from others about missing parents who have died.  I still miss Mum and she's still very often thought of and referred to by other family members.  The youngest great grandchild does not have strong memories but the others all remember.  The sayings which came from her have passed into family talk.  Not clichéés, but things which were funny at the time, either by circumstance or tone. "I just fancy a boiled egg," and my sister and I immediately hear the pathetic tone in which this was said.

The fourth anniversary of her death was just a few days ago and today was her birthday.  She would have been 94 today.

My sister from well up the coast is in Sydney and came to lunch on Saturday found this photo.  It was only a small one, taken by a street photographer.  She had it enlarged and it has come up very well indeed.  It was a (very) early birthday present for me.  I think it was taken in 1941 and Mum would have been 21.  She's beautiful and looks lovely here.  I'm very glad she had it enlarged and clicking on the picture here gives a much better view of her.  It's not really pink, it's the early morning sunshine causing the strange hues here.  Still after the rain we have had, the sun is very welcome.  The weather bureau reported rain on 22 days in March and April is going the same way.

As we looked and then looked at pictures of her father, we could see the resemblance even in her great grandchildren, especially in the eyes. 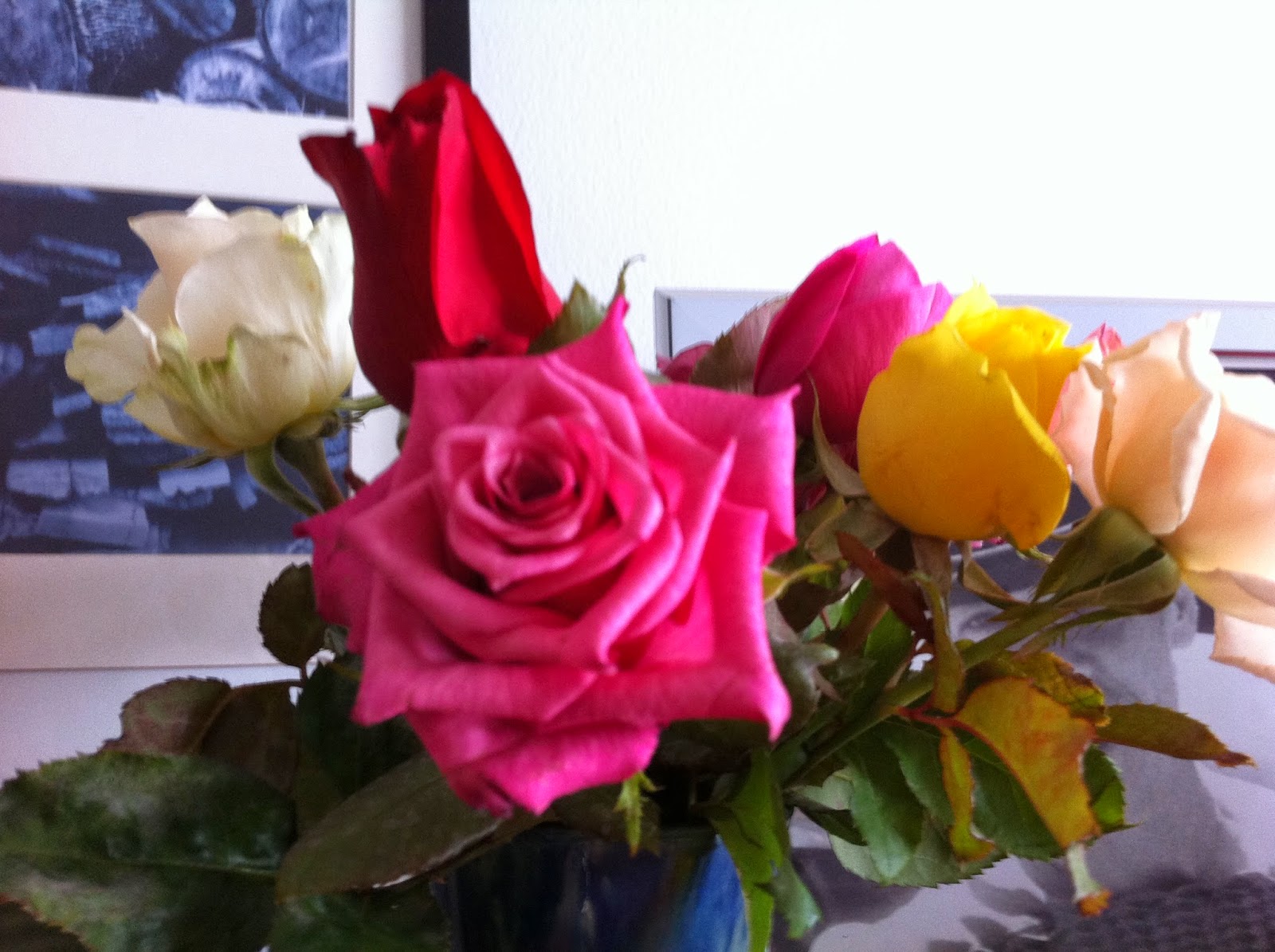 My sister brought the roses from a rose farm out near where she is staying.  She brought a big bunch of pale pink roses for me and two of these smaller bouquets  for my two small granddaughters who were here for the weekend.  They were amazed someone should give them flowers.  Miss M could not have flowers when she was in hospital and so sick, so they loved these.  Unfortunately they forgot to take them home so I get the pleasure of looking at the roses a while longer.  The vase is very old, well over a hundred years.

Miss M had more time in hospital from  Sunday a week ago till Wednesday afternoon.  This was for the usual procedures and monitoring the start of the third lot of chemo.  Unfortunately, the effect of the anti-nausea drug did not last long enough and she spent some hours constantly throwing up and had to be re-admitted.  She was well enough to come to my place but had extra medicine which was fenced about with times and regulations.  We coped and she and her sister had a good time here. 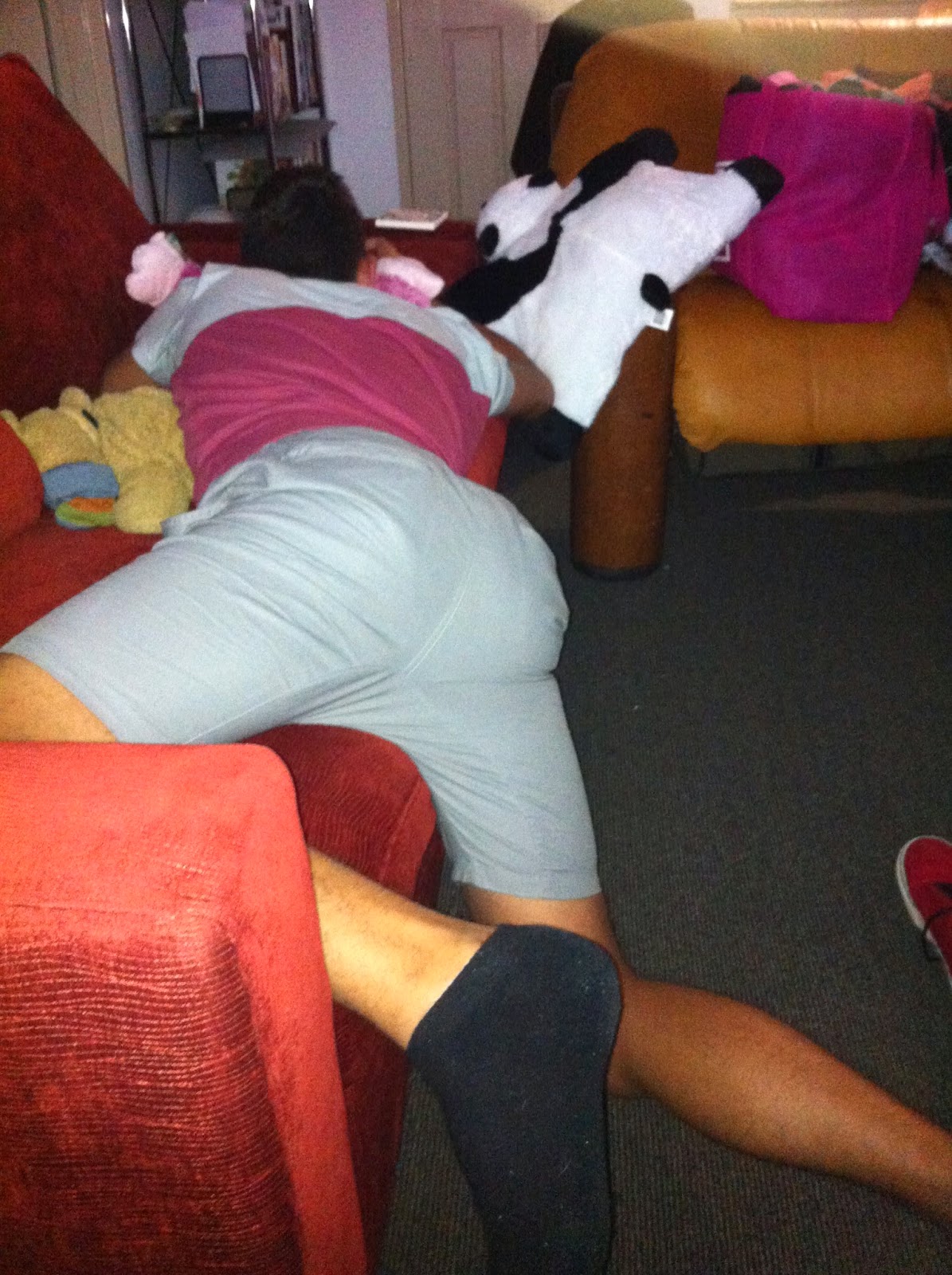 To compound the noise level, the 15year old older brother arrived yesterday.  I remember annoying my mother by reading, stretched out flat on the floor.  She could not understand why anyone would read like that. This photo shows him on the sofa bed.  He lay like this for an hour watching a replay of an English soccer match on my iPad.  One knee is on the floor and the iPad is in the corner of the lounge.  I am sure being stretched out on the floor as I used to be is more comfortable than being like this.

It's a while since I have seen him.  At Christmas he was about my height.  He is now well and truly taller than I am and is on the verge of being taller than his dad.

He is noisy and teases his sisters who of course react.  In a way it's reassuring to hear Miss M reacting to what he says or does.  In reality it was unpleasantly loud in a small apartment.

His dad took them home in the early evening last night and I must admit I'm relishing the quiet.

I made one glove for Master 8 who lost the pair I made last year, or perhaps they disappeared in the moves their parents made.  I'm shortly going to find some knitting and sit and concentrate.  I'm thinking of something more than a fingerless glove, perhaps the Stephen West shawl for which I bought both pattern and wool quite a while ago.

That's a lovely photo of your mum, what a treasure. Love her hat!

I agree, it is a lovely photo and she looks full of life and youth!!! You must be very overwhelmed with all the people and noise. I know we would be too. The roses are beautiful, but I must ask if they have a perfume?? I prefer a perfumed rose any day!! They do make me sneeze, though I willing trade that off.

Your grandson looks very awkward in that position. I'm glad his sister is able to react to his teasing even if it was a bit noisy for you. We had the family in the cabin for about an hour this afternoon, after a long walk on the beach, and it was very noisy, so I can definitely relate! Right now I am supervising both grandsons supposedly watching television while the menfolk cook sausages on the barbecue and DD prepares salad. Younger Grandson is climbing over me as I type on my iPad.

I forgot to ask, where is the rose farm?