a yarnover too far

I had two granddaughters here for most of the weekend.  Social creatures as they are, they each had a birthday party to go to.  Fortunately at much the same time and in neighbouring suburbs so son had only one trip for them.

Last time there was MESS! everywhere.  They are messy at home, but it won't work here.  Not enough room and too easy to leave things here.  Then their mother is annoyed when only one sock of a pair makes it back.  I kept a a fairly tight rain on such things and we even managed to get a load of washing done and dry to go back home.

While they were out socialising, I spent quite a bit of time on one of the chemo hats.  Beret style, with lace.  For a long time I  could not work out why the pattern was astray, not lining up.  I finally realised there were two stitches too many in the row, two errant yarnovers, which threw everything out.  The beret is now about half finished.  It's 5 ply in some yellow Bendigo wool I have had for quite a while.  Still lots of stash to use up and chemo hats are quick projects.  Next one will be more for a boy.

Miss M was very happy to be well enough for a party.  She looks quite reasonable although she has dark circles around her eyes.  She's very independent, hates the thought of having a rest, insists on pumping up her airbed.  Independence is a good thing in attitude to overcoming leukaemia, but she needs to learn that sometimes a rest for 30 minutes is necessary.

Yesterday my son taught the two of them how to make scones.  Their mum does not have the patience to teach them cooking, just as their cousins' mum won't bother.  However, both their dads are good cooks and are teaching their children how to cook, both meals and snacks. Actually my three sons are all good cooks.  I started early with them. 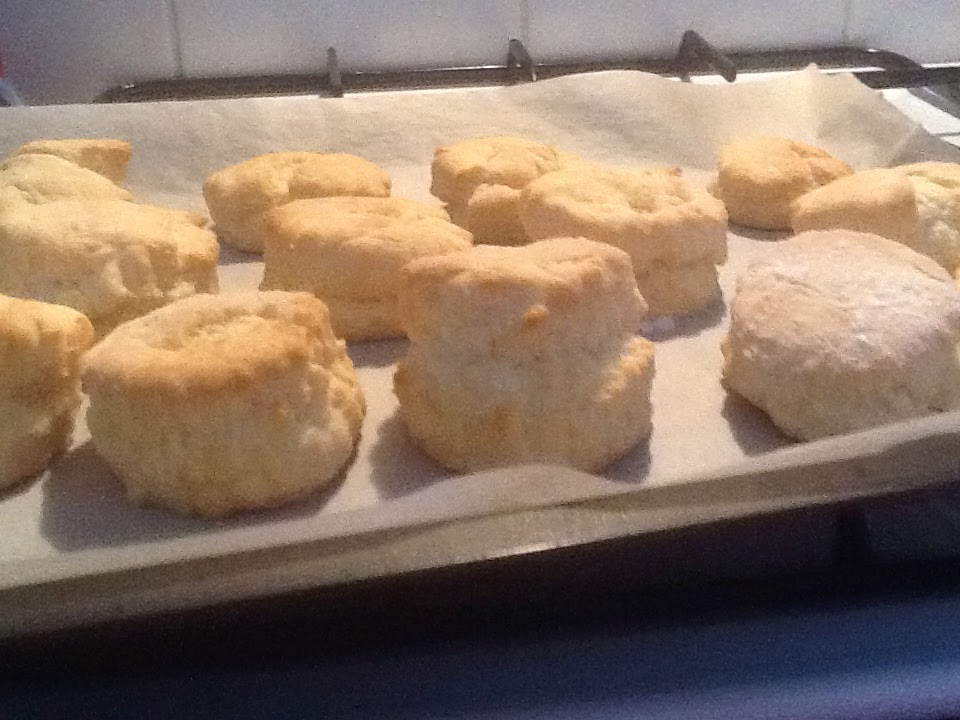 These scones turned out well and made a delicious Sunday afternoon tea with a cup of Irish Breakfast for me.  I use a very basic recipe, flour, salt and milk.  This was along the same lines.  I would have made them a bit browner on top, but they were cooked through.  I don't usually like gluten free products.  These were a good exception.  Self raising  gluten free flour, a pinch of salt, about half a teaspoon of additional baking powder to what was in  the flour.  Thickened cream to mix and make them rich.  They had fun cutting them out with fluted scone cutters and we had a pleasant afternoon tea.
Posted by Jan at 10:46 am

The girls are Very Social!!But I think, in general, young people are ore social than I ever was, or am!!
I know how Miss M feels about being independent, it is a tiny bit of control in an out of control world.
How wonderful those scones look and I think it is so important to be able to cook for yourself!!

My mum didn't teach us to cook but she did send us to cooking lessons at the Prospect County Council in the school holidays. When WM and I got married, it was trial and error as we both lived at home until our wedding day. Getting all the parts of a meal ready at the same time was the trickiest part. I started DD cooking at a very young age; she used to dice mushrooms with a bread and butter knife when she was two! "Baking Day" on occasional weekends and during school holidays is a cherished memory. Her four year old son is a keen cook and will even stop moving in order to watch Master Chef!