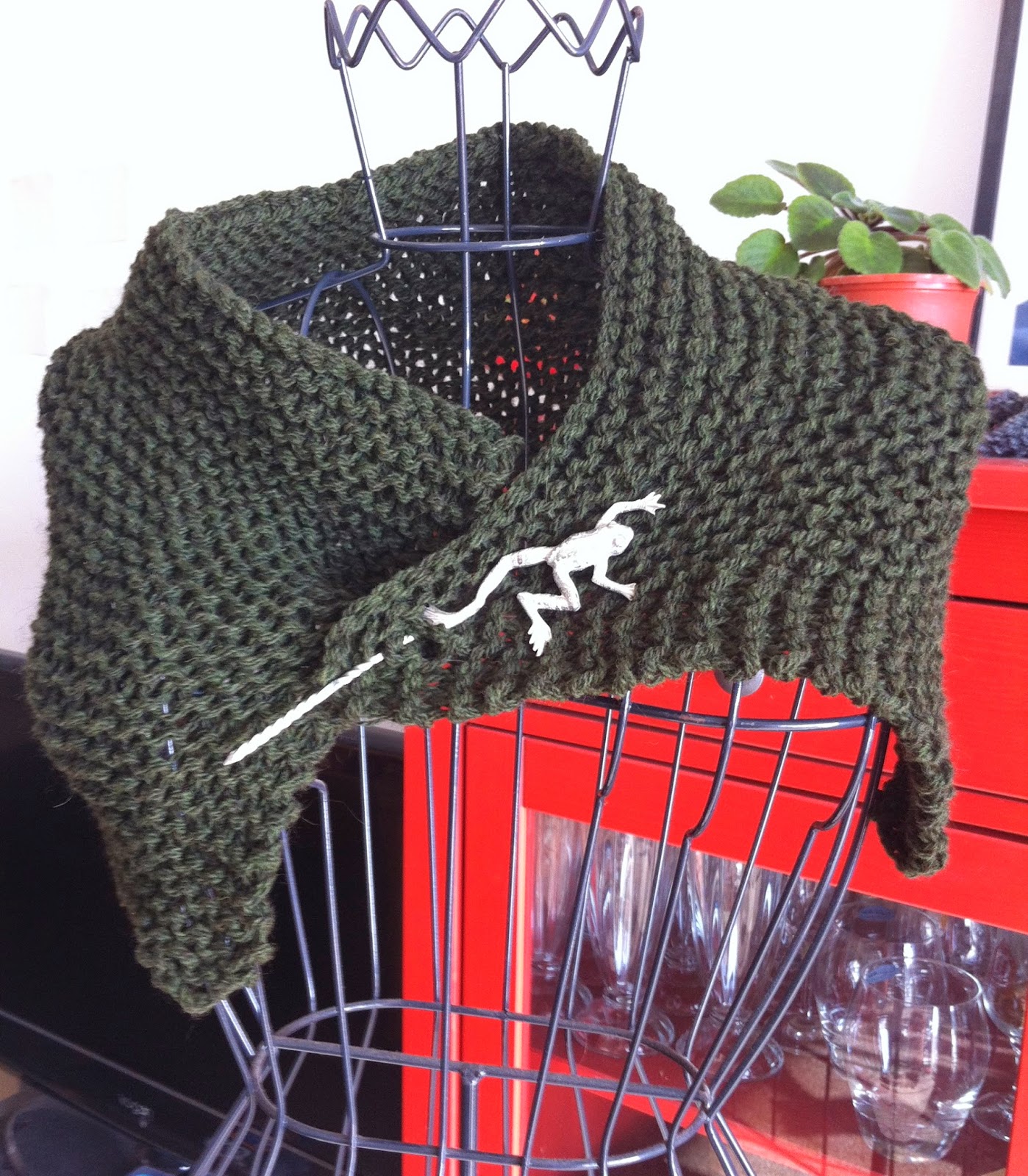 One finished Boston cowl which still needs blocking to increase its length.  When I finished it last night, the light was too poor for a photo.

Blocking will give it several inches more in length.  DIL loves it and will look for a fabulous button for it.  I could probably find one she likes as we have similar tastes, but I'll let her choose it and have made do with a shawl pin for the photo.

It's made from my current obsession, Quince and Co Owl, colour bog.  The Owl is ten ply, worsted weight and it was done on 10 mm Addi clicks.  It took me quite a while to get used to such enormous needles and at first I could do only a couple of rows at a time as my fingers hurt.  The yarn is used double to get something  approximating  super bulky.

The pattern is very easy and comes in several sizes.  DIL bought it but I would have just winged it and made up my own.  It is really nothing more than a rectangle with a buttonhole in top corner and then a button sewn in middle of opposing side.  She does knit, but hasn't reached the stage of being able to see what was done to construct something. 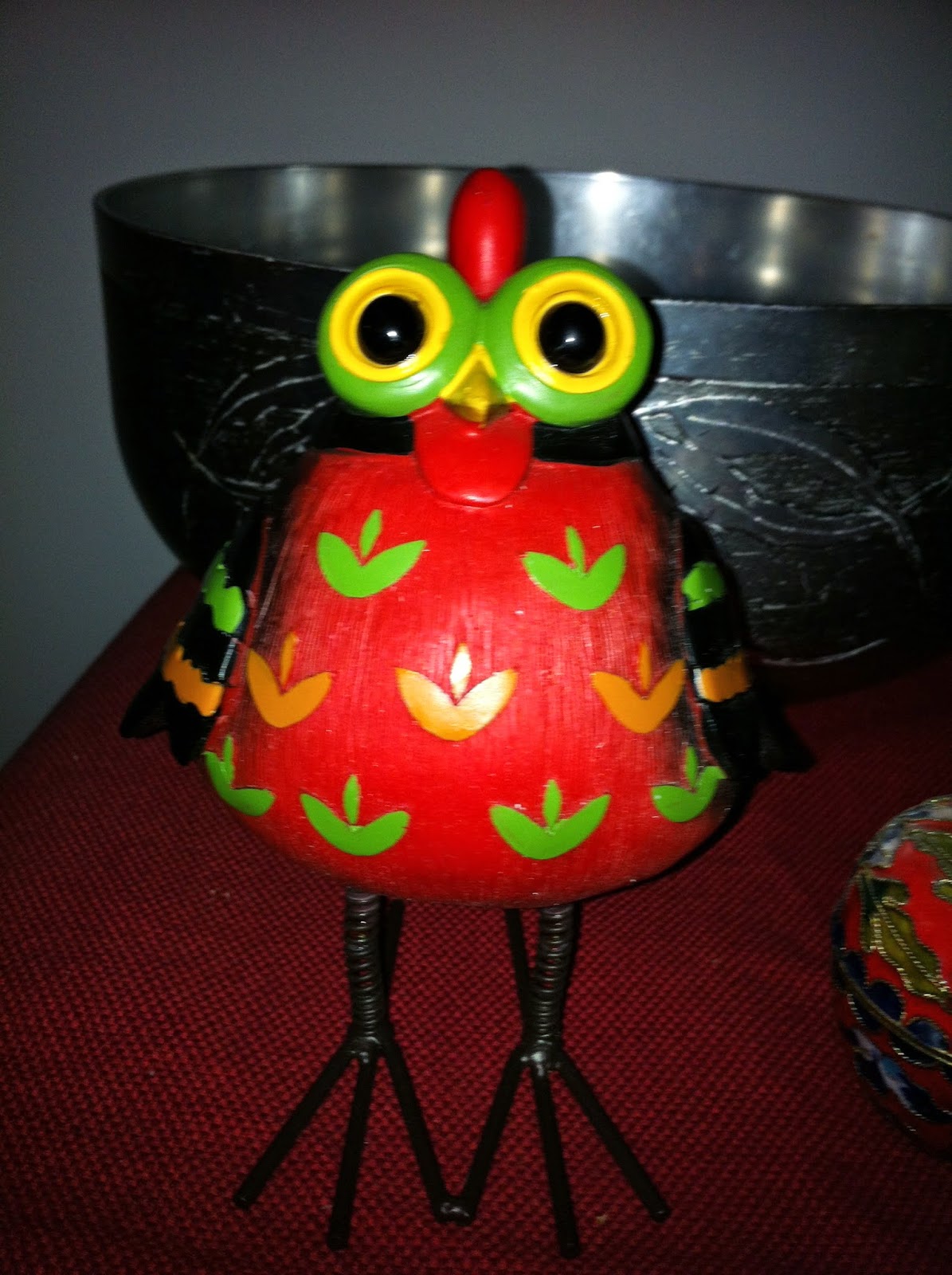 While we are looking at my red cabinet, here's a picture of the present Miss 11 bought for me from her school's Mothers' Day stall.  It has springs for legs so wobbles.  She took the picture. The first was poor as there was little daylight so she turned flash on.  It really needs more ambient light as well as the flash.

Mothers' Day stalls have certainly changed.  When my sons  were in Infants and Primary, parents sent a gift to the value of $5 and then sent $5 for child to buy a  gift.  Somehow, I never seemed to get anything approaching the value of what I had sent.  I do remember opening a present one year as son looked on with excitement in his  eyes. It was the lid of a large aerosol can, filled with plaster of paris, plastic flowers around the edge and a cheap  candle plonked in  the middle.  Of course, I made the usual responses about it and thanked him profusely.  I then moved on to the present from his brother.  I could hardly believe it and didn't know whether to laugh or cry as I opened an identical present.  I kept them in the sideboard cupboard for very many years, a fact which they both remembered last Sunday.

Dil was here for a pleasant Mother's Day lunch on Sunday.  She loved the hat I did for her as shown in previous blog entry.  I guessed the size and it was just right.  We had a pleasant time and my sons did the baked chicken lunch with chicken and vegetables cooked slowly.  Another son made his famous gravy and we had a very relaxed time. 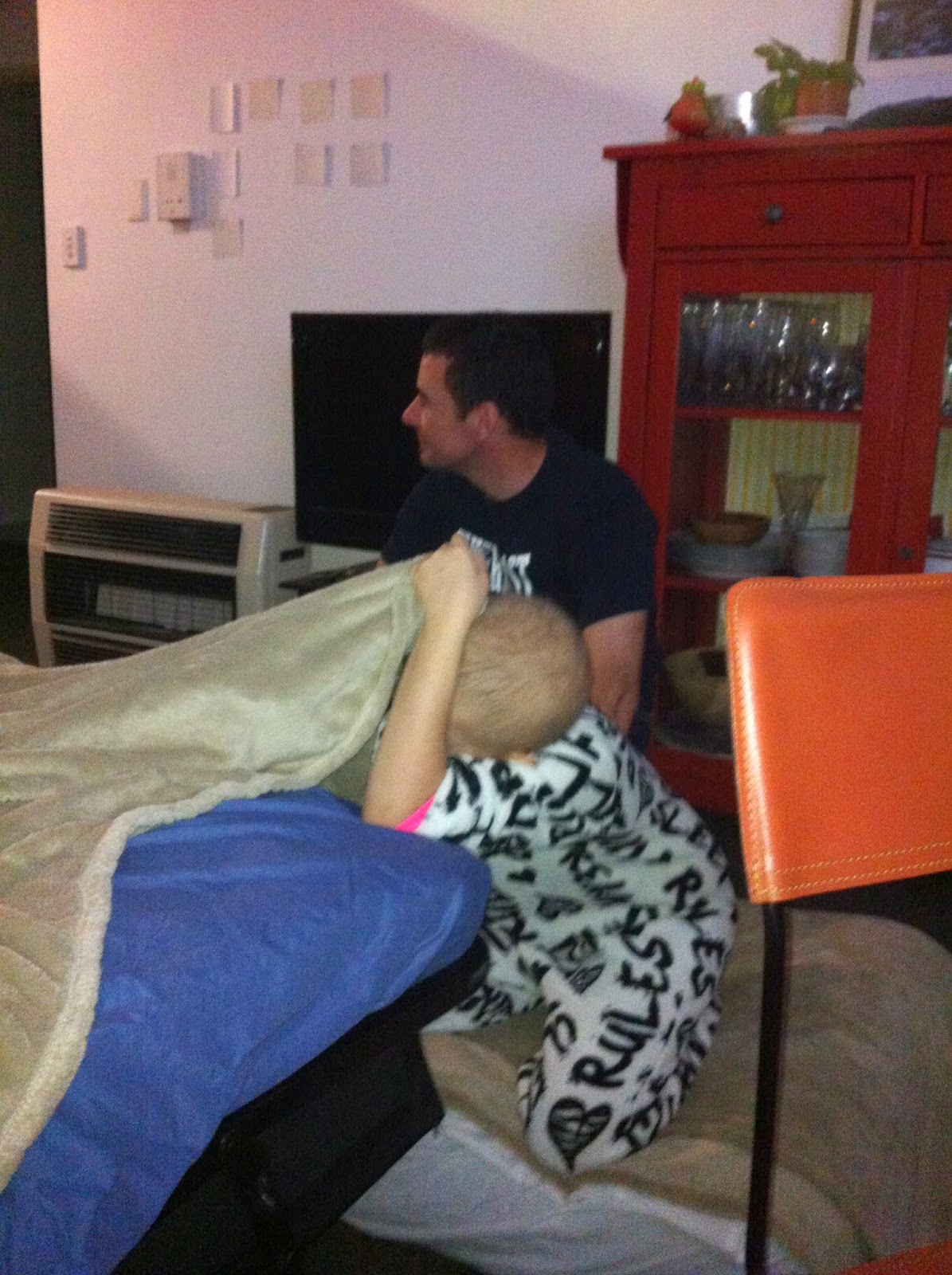 Having  Miss M, her brother and sister here over most of the weekend was noisy, messy and chaotic.  They went home to have lunch with their mother on Mothers' Day, so a relaxing meal was just what was needed.  Miss M had been in hospital six days instead of the usual four and was tired from being woken every night several times for observations.  Not only was she  tired,  but she was cranky with her brother and we had several very noisy tantrums from her.  Stamping, screaming, yelling and a total meltdown.  She used to throw them regularly but I hadn't seen one for several years.  The illness has brought a sense of entitlement with it.  Certainly not fostered by hospital or family, but part of the whole process I guess.

Here she is teasing her big sister by trying to tickle her feet under the blankets of the sofa bed. 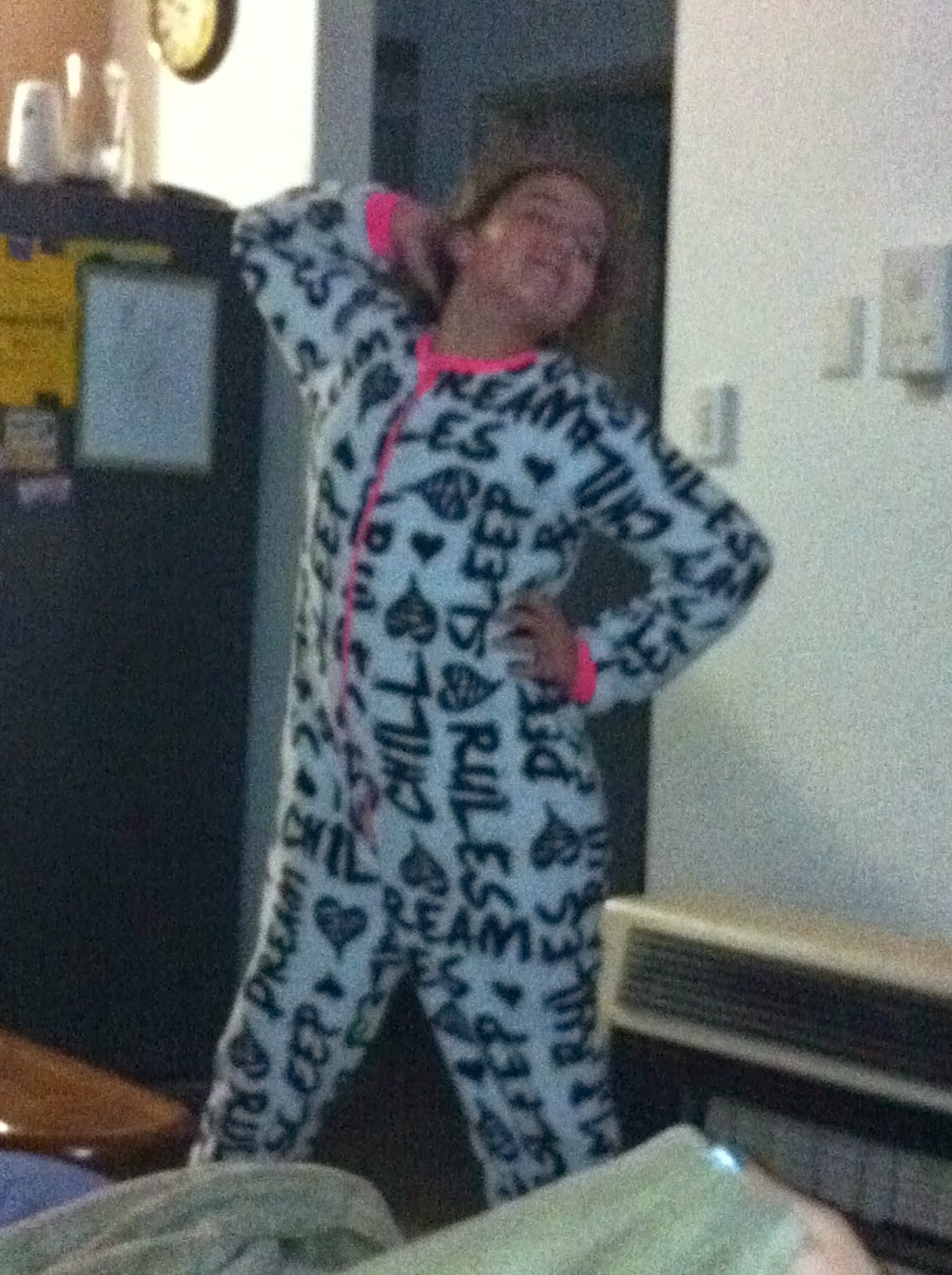 She loves her onesie, although it looks to me to be uncomfortable to actually use.  It's made of some artificial material and I would not like  the feel of it.  It's not the usual fleece but is soft and feels totally artificial and clammy to me.

Miss 11 has rejoiced in having the use returned of both her arms.  The casts have been removed and she has resumed playing Saturday soccer.  I wonder about the wisdom of this, but trying to shield them from every danger is not a possibility.  She is a bit of a model as can be seen from the photo.  I asked her how she was going at school, as she is bright but has had a very disrupted year with Miss M's illness.  She told me, "real good."  I automatically corrected that to, "really well," and she looked at me puzzled.  I think that's par for the course in her area.
Posted by Jan at 11:54 am

I'm glad your grand-daughter's arms completely healed. She seems to enjoy posing for the camera.

People often look at me strangely when I respond to "how are you?" With "well, thanks"! Many years ago, an elderly gentleman told me that God is good but I'm well and I've never forgotten that!

I guess the tantrums come with a sense of entitlement but it's not something that one would want to encourage.