My son took the two hats I finished earlier to the hospital even though Miss M was discharged from the round of chemo  on Wednesday afternoon.  He met the mother of another little girl patin who knew Miss M wasn't there and asked why he was there.  He showed her the hats and said he was just dropping them off into one of the several baskets each of the three oncology wards has sitting around.  She felt the hats and commented on the softness and quality of the yarn.  He told her, "Mum doesn't use cheap and nasty yarn in anything," and asked if she would like one.  She chose one of the two and then cried that someone might make things like that from expensive yarn just to donate.

Even before all this leukaemia business erupted into our lives, I have always had a policy of not giving presents which I would not like to receive  or anything cheap and shoddy.  She recognised the good stuff and I was pleased I had used it.

I'm now working on another two hats.  One I could do with my eyes closed, in a thickish alpaca.  The other is more of a lace beret in a finer wool and I will need to follow the pattern for it.  Just a way of gratitude for the care taken of Miss M these last few months.

This lot of chemo is the last in this cycle.  She actually gets two or three weeks before the next lot of tests and chemo.  I think that round can be given in the clinic each week without a full admission unless she picks up an infection.

We will have at least the girls here this weekend.  Not sure about the Teenager.  My son wants to take the wheelchair and take them to the city for the first night of VIVID the light festival on Sydney Harbour.  Lots of beautiful lights and ethereal shapes.  A lot will depend on Miss 12 who has been in  Canberra all week with her class.  She is not a night owl and is perfectly happy falling asleep wherever she is, so she may not have missed too much sleep.

I was minding them all one night at their aunt's place.  Miss 12 disappeared during a game of hide and seek.  I think she was Miss 8  sat the time.  She was found after some searching in her hiding spot under the big dining table, fast asleep on the floor. 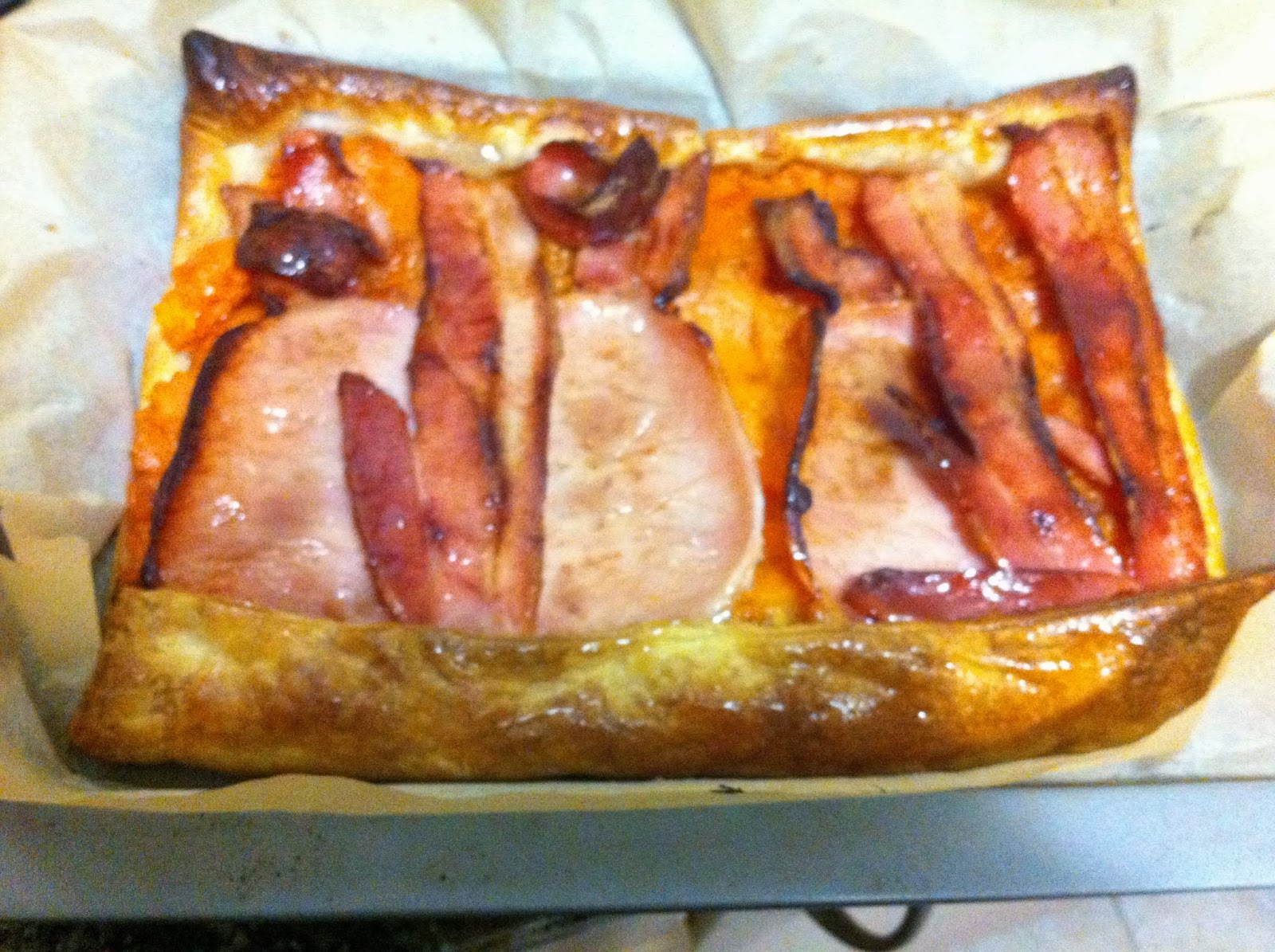 Now, because it's Friday, a recipe from Gourmet Traveller, I think.  It was nice as the bacon I used is well smoked by a small supplier to my fruit and veg guy.  The original recipe called for m ashes pumpkin on top if puff pastry but I used sweet potato as that was what I had.  Spread the mash mix to within  about a centimetre of the edge of the pastry.  Cover with strips of bacon and using about a tablespoon of good maple syrup and a pastry brush, brush the syrup onto the bacon.  Cook in a hot oven.  It was different and good and an easy way for another vegetable serve.  It doesn't need lashings of syrup.
Posted by Jan at 3:49 pm

The story about Miss M falling asleep is very funny!! I heard a lady say exactly that in our wool shop on Saturday, she was buying some beautifully soft wool to knit for the refuge. It must warm your heart to know that your knitted hats are so appreciated.
Oh yum, your sweet potato bacon tart looks so yummy. I only buy bacon from happy pigs from the deli at the corner too.

What a lovely story. I'm so glad someone recognized the quality of the yarn you use.