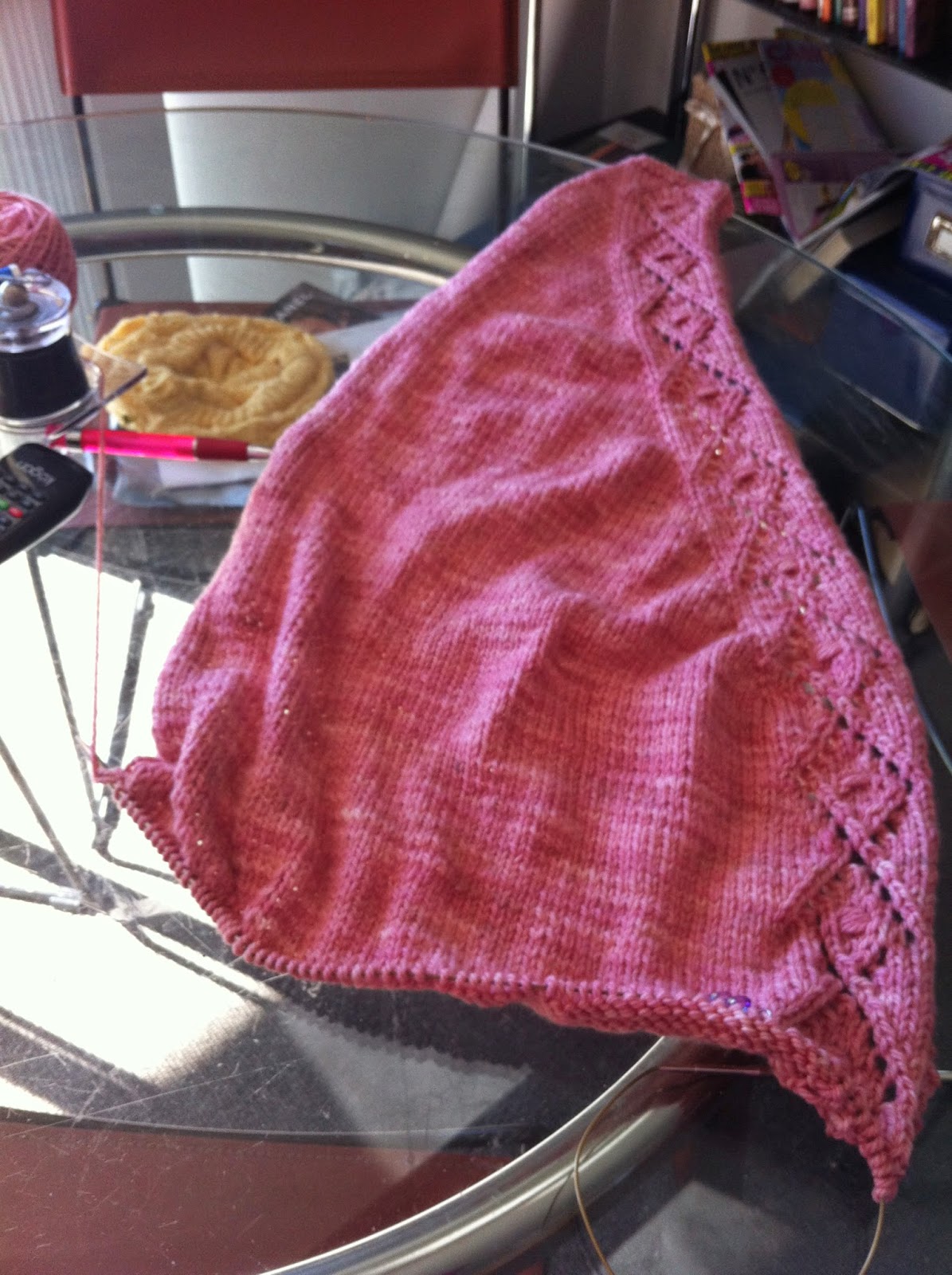 I have been making steady progress on the Acadian shawl.  It will block to perhaps more than a wrap but not really a shawl.  I have done 13/23 repeats of the diamond edging, so am over halfway to the finish.  I have only three more repeats before I start the decreasing in the body of the knitting.

The Aran weight yarn is lovely to knit, soft on the fingers and I am enjoying the pink which is not a colour I would normally choose for myself.  I am wondering just what I am going to block this on.  The picture shows less than half of the knitting and it will be bigger when blocked.  Now if my spare bed were available it would be good.  However, son now sleeps in that room, so I can hardly take over his bed with a wet piece of knitting.

I just realised he'll be away from Friday morning till late Monday of this coming long weekend.  If I get a move on and finish the knitting, I may be able to use his bed to oread out the knitting on a blanket. 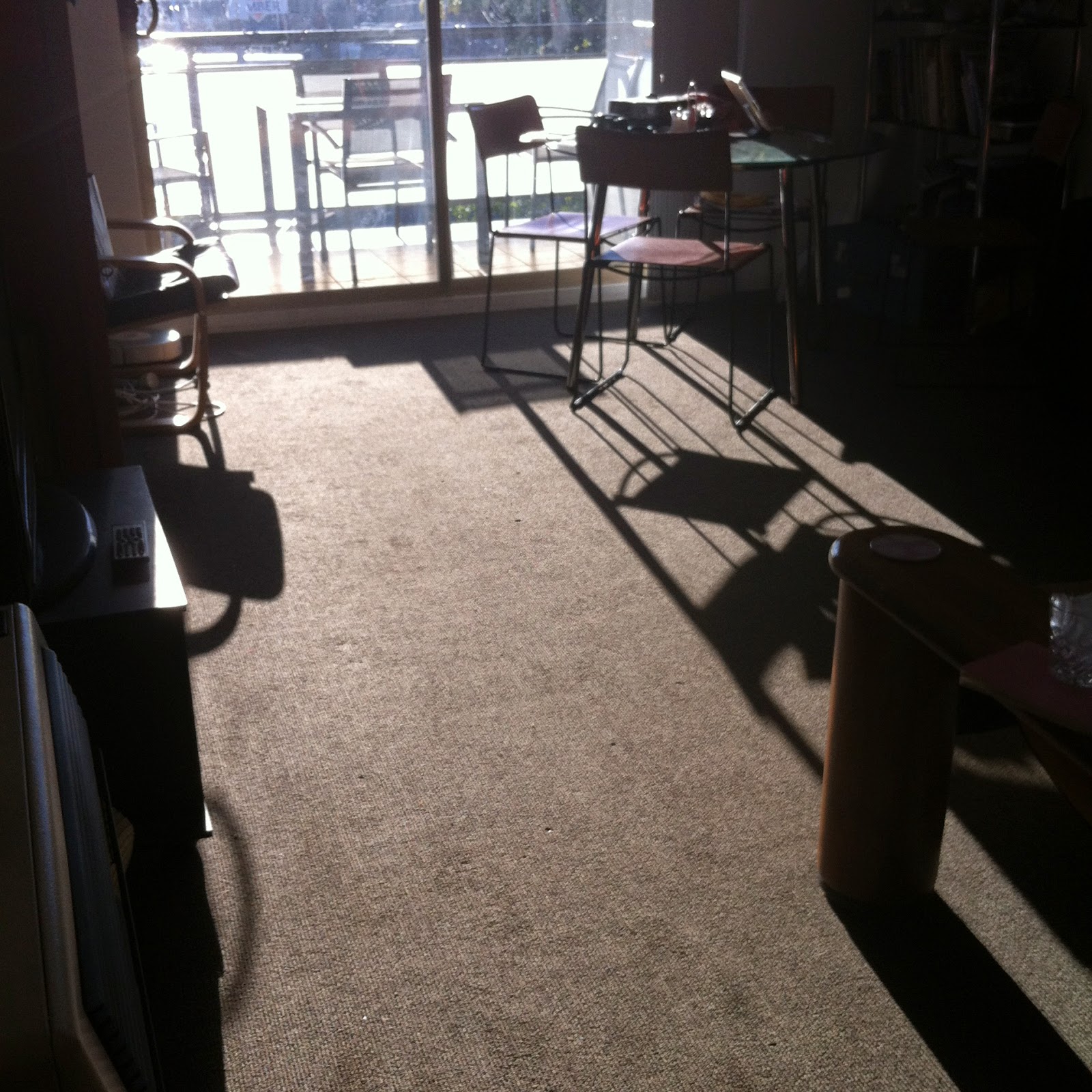 It's finally beginning to cool down.  Still too warm in the middle of the day but the nights are getting colder.  It was 6° here yesterday morning around 7:30.  The colder night gave me a wonderful sleep, eight hours without stirring.  I haven't slept as well as that for a very long time.  It was lovely to wake and see how long I had slept without waking even once. A little bit warmer this morning but still chilly and beautifully sunny.  The sun fills most of my lounge room early theses days as it's low enough in the winter sky to come straight in under my balcony roof.  Very pleasant it has been too, to have my second  cup of coffee in the sunshine.

It's a bit weak looking here but it's not long up and there was some fog outside.  While it's been a bit nippy, I haven't had the heater on much at all this year yet, perhaps just twice in the evening.  Gas costs have risen enormously, so if I cam make do without the heater, then I will.  I've been fine with an extra layer on at night but won't hesitate to turn it on if needed.

Waste not, want not, take two.  I darned a pair of socks a few weeks ago and went to wear them again today.  They are old, absolutely nothing fancy but I have always liked them  They are made from Lionbrand Magic Stripes yarn which came from an online shop in Melbourne at least twelve years ago if not more.  As I said, nothing fancy at all.  It's called sport weight.

There was another hole in them,  Nothing surprising, you say, considering their age. Perhaps not but this hole was in a strange place and I think that somehow I must have pulled a thread.  It was in the middle of the top of the instep, right before the cuff of the leg.

So I sat down just after breakfast in the sun which was just coming in then.  What a virtuous feeling darning produces!

I pulled out my cowrie shell which was always used for darning.  I think there was a larger one, but this size works too.  I know people who used an old light bulb or even an orange to slip into the sock to stretch out the hole for easy darning.

My grandmother taught me to darn, very many years ago.  I am very much out of practice but want to wear these socks as long as possible.  I remember when Woolworths and Coles as variety stores selling hanks of  multi-coloured strands of darning wool.  There were hanks in grey tones, brown tones and blue tones.  That's a long time ago too, well before the advent of nylon socks or other mixes of yarn, 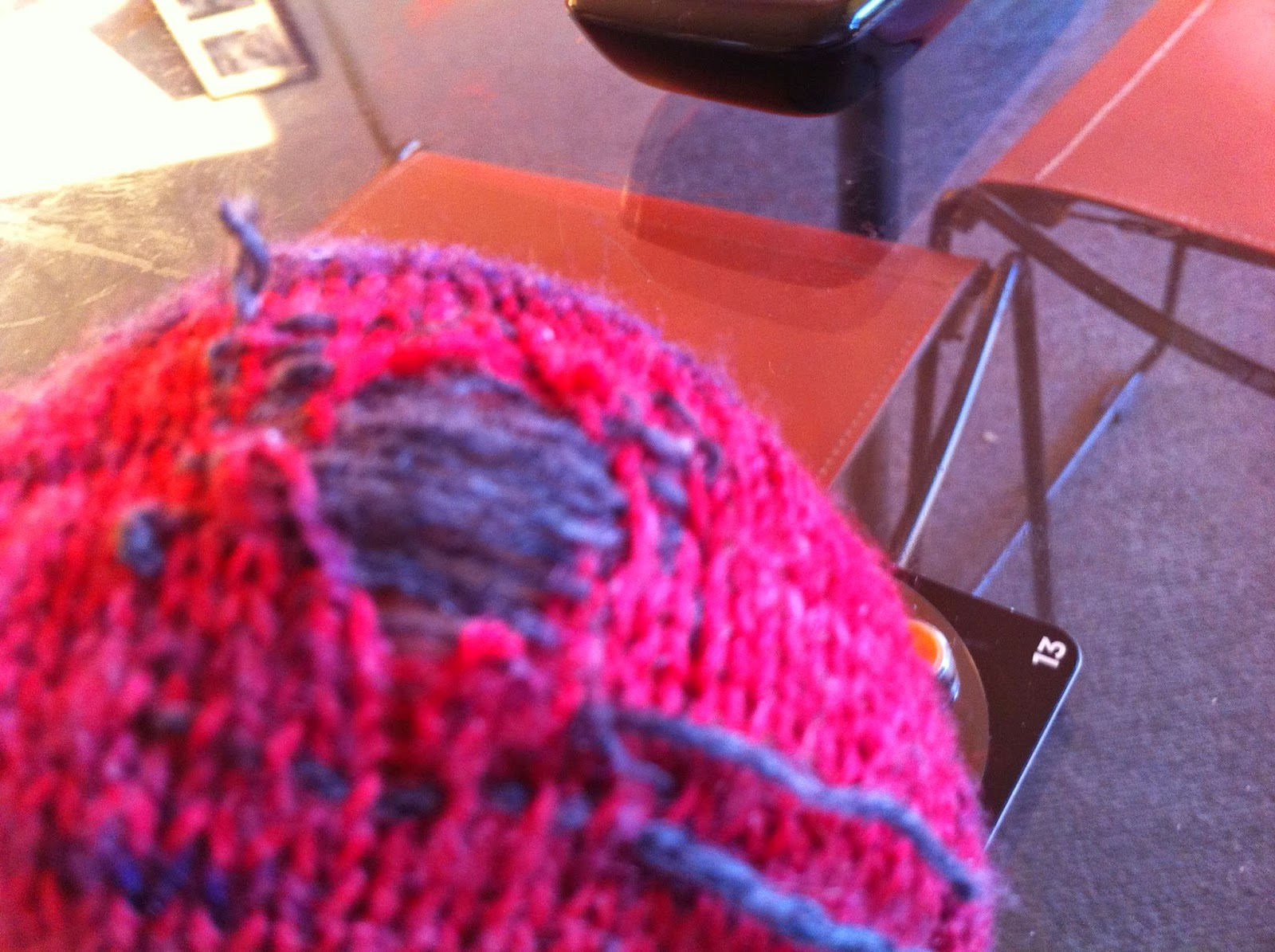 I split some very dark grey yarn into its plies. The aim was to match the thickness of the thread  to the thickness of darning  yarn as well as possible.  This makes a smooth, non-lumpy darn. I was not worried about the colour and had nothing to actually match the sock.  After all, who will see it apart from myself?

I ran a thread of small running stitches in a  square right around the hole.  Just into the solid knitting.  This stabilises the material and forms a good base for the darn.

I then criss-crossed the hole with yarn from one side of the square to the other, catching in any stray actual stitches possible.  Threads should lie as closely as possible together.  Picture shows this in progress.  My grandmother  could place threads so closely together that they looked like solid material.  I was never able to get them as close together as she considered necessary.

When the hole has been filled, turn the sock around 90 degrees.  Work the needle under and over the base of threads which now lie at right angles to your work.  extend the dar into the solid part of the sock and again, place the threads as closely together as possible.  Keep an even tension and don't pull tightly on the yarn as this will cause uncomfortable lumps int the dar, which will irritate the foot.

Weave in the ends and voilà your sock has been mended.  As I said, it gives a virtuous feeling of making something useful again.  After all, the socks took a lot of time and effort to make.  Why not mend if possible?

My dad used to darn his socks. In his later years, I asked him to teach me but he refused. My mum has no idea and couldn't help me now anyway as she is losing her mind bit by bit (very sad to see after watching her mum with Alzheimer's). Two mini-strokes in 2002 and another couple since haven't helped either.

Anyway, I have a pair of commercial socks that WM bought me with Tigger on them that need darning -- I'll follow your excellent explanation and also check out YouTube for a visual demonstration then give it a go. After all, what have I got to lose? I can't wear the socks as they are anyway so I doubt I can make the situation any worse!