My youngest son is now in late 30s.  Before he was born, a friend made for him a set of leggings and a top from blue Patons Caressa.  They wore and washed well.  A few years ago, I found Caressa was still on sale and I bought a couple of balls.  I have no idea if I used them or what they made but I found some more in a box of 8 ply the other day. 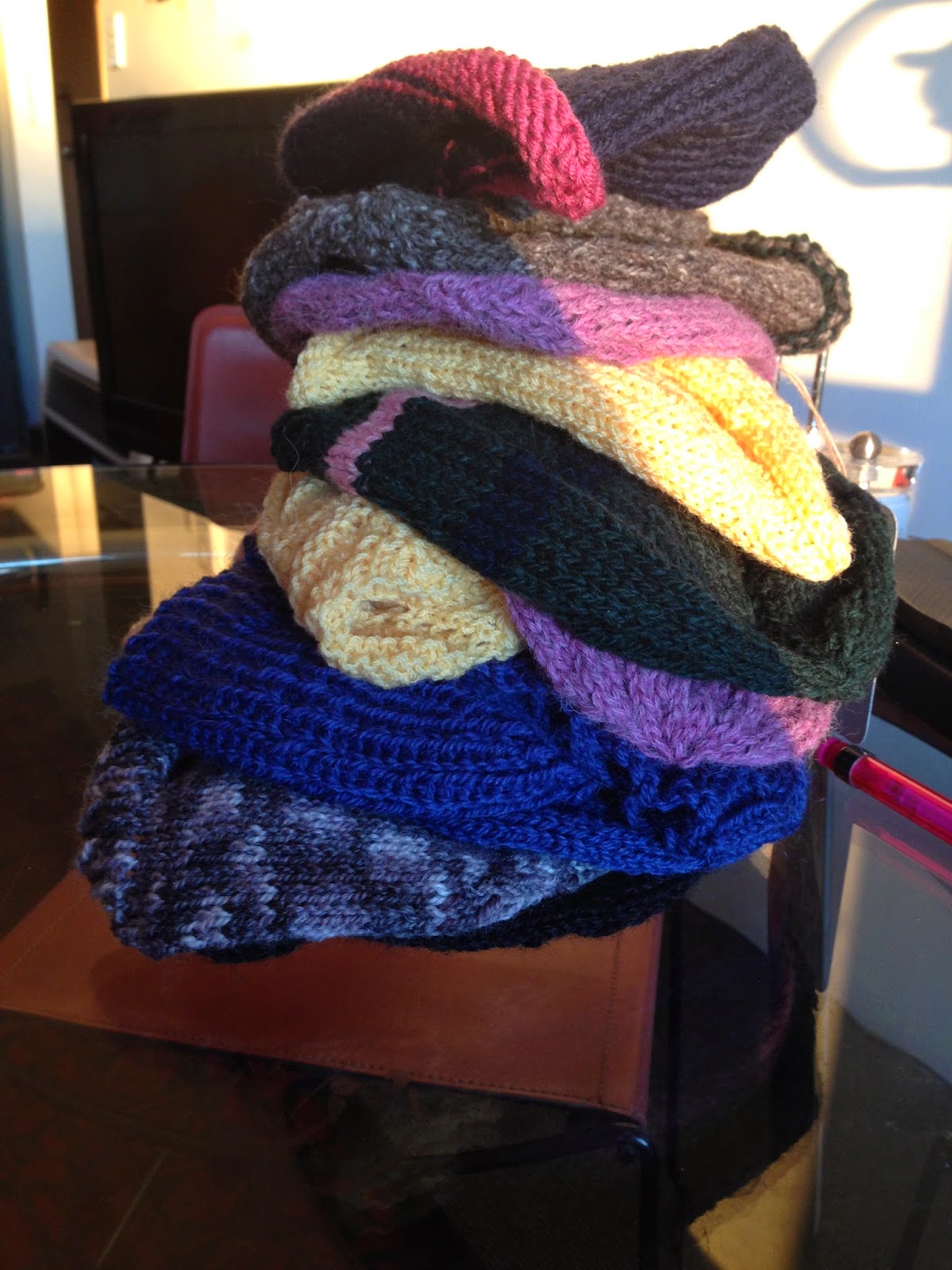 I have been making chemo hats, hat after hat.  It helps my state of mind and I like to think that every hat made is another little head warmed.  My son tells me that hats are always in demand at Westmead Children's oncology, and it's a way to show gratitude for Miss M's treatment.

I use only good yarn, with alpaca, merino, cashmere, silk etc as part of the mix.  Miss M had tried some hats on but said they were scratchy.  However, she approves of mine.

I made a couple with the Caressa and they felt fine.  I was surprised to see that it was still available.

Here are some of them.  The grey/blue mix near the bottom is Caressa.

My eight year old grandson unexpectedly spent a few days here last week.  He was impressed with the hats and went through the pile.  "This is for a teenager, this one is a toddler, I would wear that one," and so on. 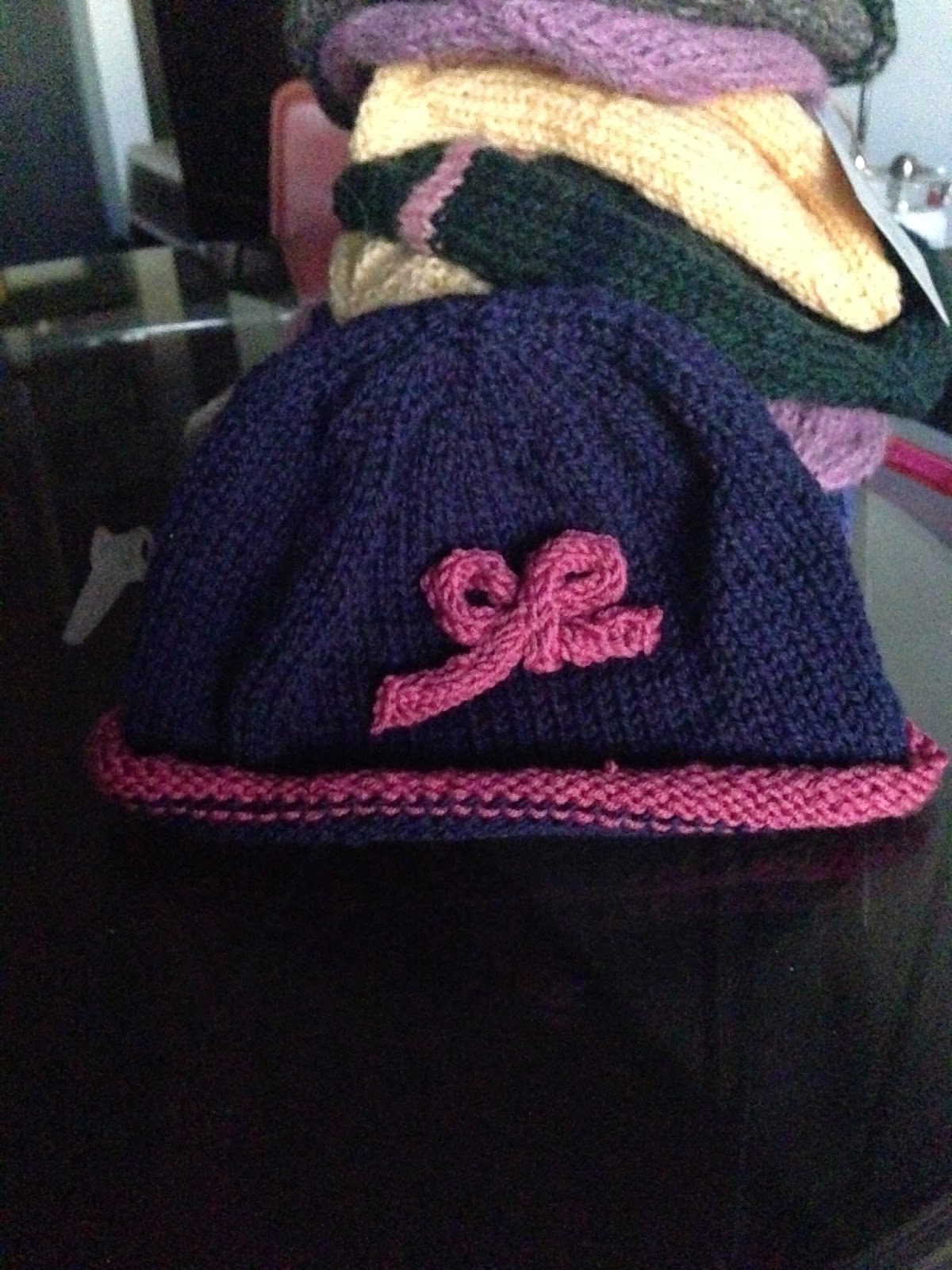 My son took around twenty hats to the hospital today.  Winter has struck here and today has an icy wind blowing, so hopefully  they will all warm some bare little head soon.

Life has been humdrum here and at times unpleasant.  I have not been sleeping well some nights and seem to have pulled a tendon or ligament in my groin.  I thought at first it was hip trouble but have observed symptoms closely.  Exercises will help but are unpleasant to do.  They are to strengthen muscles to help hold everything in place.  Walking is slow and sometimes painful. Sudden movement is painful.  Stairs are very painful and I am grateful for a lift in this building.  Sitting is just fine but exercise is also needed.

I had more than I really wanted last Saturday.  Miss T, big sister to Miss M, turned 12 the week before.  Her mother had not had parties for any of the children for several years, so her Dad decided he would have one this year.  It was held at the Armory which is on reclaimed river land beside the Parramatta River, a mile or so upstream from where I grew up.  There are lots of pieces of play equipment and BBQs etc and it is very popular.

We invited friends from school and other areas of her life and had not only cousins and uncles and aunts, but over twenty girls attend.  It was freezing and we walked across quite a large area to get to somewhere with just a bit of shelter.  We had pass the parcel which was very popular but otherwise they preferred to play on equipment.  Lots of lovely presents and she had an absolute ball.

That night he took her to Luna Park for some one on one time.  Again she had a great time and we  have a beautiful picture of them both on a ride.  Life has been tough for her lately and unpleasant for us.  Lots of passive aggression from her mother and resistance to  any arrangements being made.

Miss M has about six weeks left of the last, hopefully,  aggressive chemo.  After that, it will be checkups at the clinic and chemo given there.  This lot is making her very lethargic.  The big black circles have gone from her eyes, but her face is pale and the eye stand out in it.  She is back in the wheelchair and stayed in it all through the party, well rugged up.  The diabetes and pancreatitis is back, but hopefully will go.  She looks pretty bad but are assured her results are just what specialist wants, so have to accept that.

What was good at the party was that there was a school mate of Miss T's there.  She has just been officially declared in remission and her hair has grown back in beautiful ringlets.  It was encouraging for all of us to see her, although she has some issues with bone density caused by the chemo. 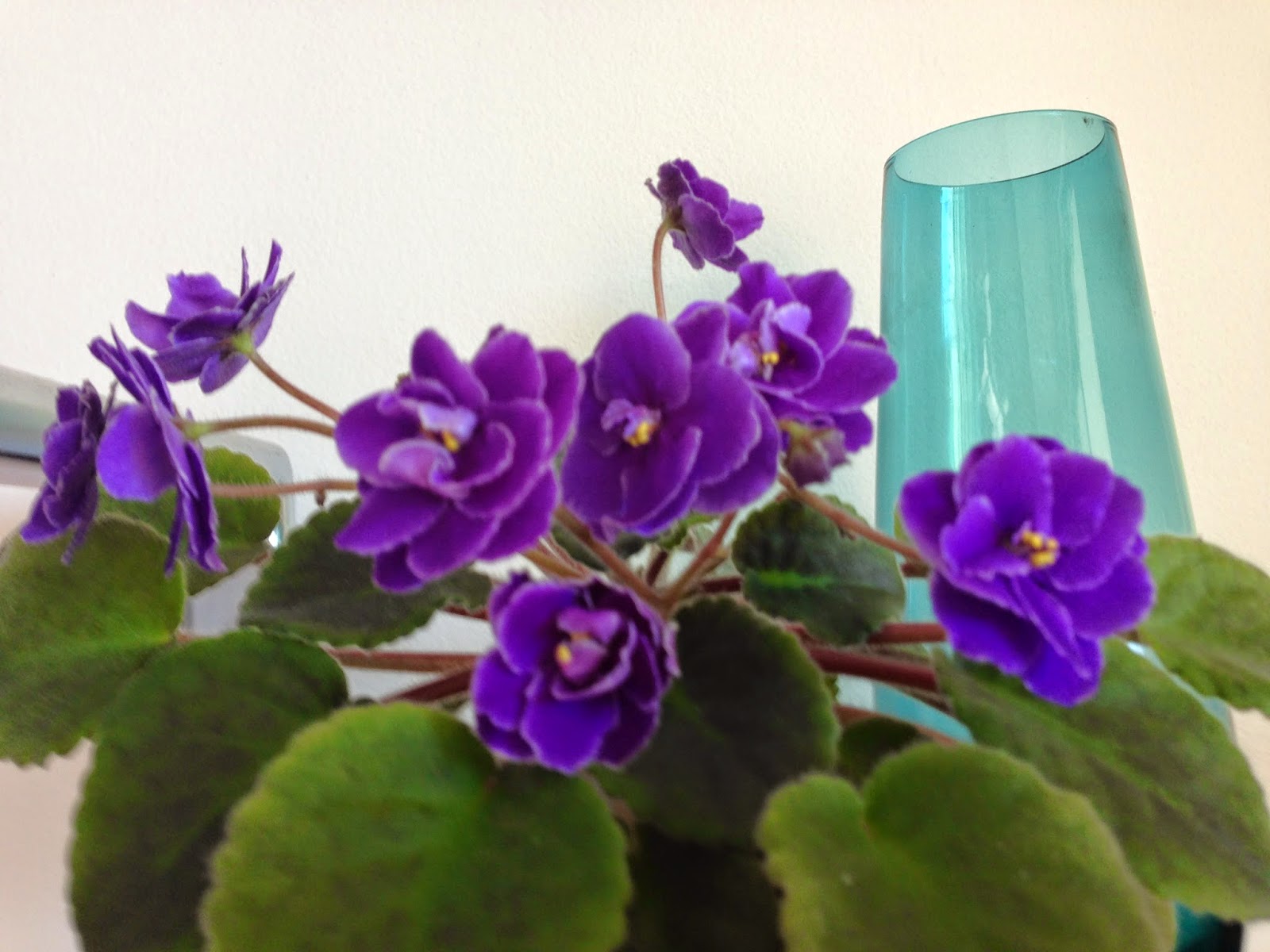 My mother had a magic touch with African  violets and they bloomed well for her.  She loved flowers and a pretty garden but was not a gardener.  However, African violets thrived under her care. I do not have that touch passed down to me.  This plant was part of a birthday present given to my eldest son several years ago.  He passed it straight over to me and it has bloomed on and off in the years I have had it.  However I had not had any flowers on it for the best part of a year and I wondered if it needed repotting or was on its way out.  Then suddenly, these flowers appeared.  There are more flowers coming.  It may be a swan song on the part of the plant, but I am enjoying them.

I have decided not to do any hats for a while.  It may be because I packaged them up to go to the hospital.  Who knows?   Last night was disturbed by a recurring stupid dream where I was making a new hat and writing the pattern down.  Over and over, I would knit in my dream, then rip it out and try something different.  I think I will go back to a  shawl for a while.  I have an Aestlight on the needles and am still on the garter stitch section.  I have made several of these and am planning on giving this to a friend from Adelaide in September.

So, here I am, responding to your last published post. Are you okay? Have you found out what the problem causing you pain in the groin was? How is Miss M? How is her dad?