It's very easy to slip into an old habit again after trying to cast it aside.  I see it is a fortnight since I posted.  Still no knitting as fingers ache and I cannot flatten the fingers on my right hand without actually pushing them down flat. My hip is sore, worse some times than others and I have been using a walking stick, more a psychological support than physical. 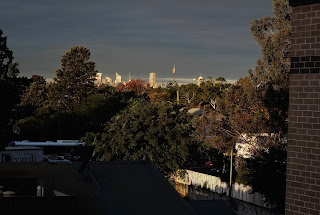 The last few days have been beautiful and I have been making the most of the sun in the middle of the day.  After Anzac Day we had lots more rain, none of it as destructive here as the earlier session. However, it is now beautiful autumn weather, cool nights, chilly mornings and sunshine.  The picture shows  the first appearance of the sun after some  days.  It was sunset and there were just a few minutes of sun before it disappeared.  Enough to show it really was still there.  The bright bit at bottom of picture is a corrugated iron fence to the stormwater canal near me.  It was just
in position to catch the sun from between a couple of buildings.  City skyline in the background.  Lots of cloud which looked this colour in the sunlight.  I have cropped the original but done nothing more. 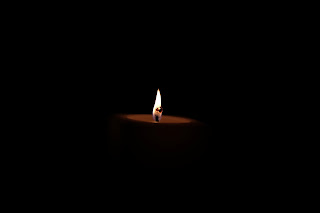 I am enjoying my new camera and getting used to the differences between it and the Nikon, mostly shown in aperture settings.  I am using it on fully manual now and enjoying it.  We had a couple of blackouts two weeks ago.  Fortunately with a gas stove top, I could heat dinner.  I ate it by candlelight which I enjoyed.  One son called it romantic.  There by myself?  I don't think so, but it was a pleasant change.  Fortunately I had a candle handy and matches and it wasn't quite dark when the power went off.  I could still see enough to get candle out. 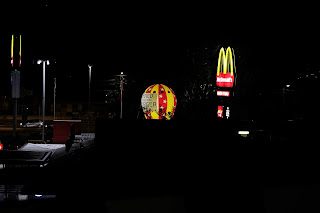 I call this photo the mother ship has landed. I looked out one night to see it attached to McD's roof.  I had heard nothing and it was quite a surprise to see it there.  I did not even hear any compressor to inflate it.  Actually, it is probably more visual pollution and it is still there two weeks later, but it made for a good photo.  No flash, just trial and error with camera settings.  A tripod would have been good  and I have a bendy gorillapod,  as it is branded, but this is OK. The granddaughters were quite impressed to see it when they arrived here last night.

All photos can be enlarged by clicking on them. The top photo in particular benefits from enlarging, although they all look better larger as more details can be seen.

Mother's Day tomorrow, not my favourite festival of the year.  I get tired of seeing beaming mothers in bed being presented with steam cleaners or hair removal gadgets or similar.  I  sent around my sons what I called the "usual mother's day admonition" not to buy me anything.  I don't need a day to remind me of how supportive and helpful they are all year.  We are having dinner at local pizzeria just down the street from where we all lived for so long.  We are regulars there and they know our preferences.

Hello, hello, hello!!!! Nice to have you back. All those beaming mothers give me the willies!! So many things are commercialised to within and inch of their lives now. Glad you didn't set yourself on fire with the candles. I hope your hands are feeling better, so you have some sheepskin gloves, I remember seeing some with the woolly side IN, to keep your hands warm and maybe a little supple-er int he cold.