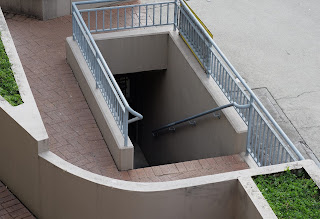 It is now two weeks since I realised my son had passed on his head cold to me.  Two weeks fairly well blanked out in a fog of stuffed head. I am finally beginning to think that there is light at the end of the tunnel.  Son was affected as badly as I was and he had a couple of days off work.

During that time, my camera has stayed on the shelf.  However, today seems better and the rain has also gone at least for the moment, so I went out onto the balcony at lunch.  The controls seemed strange at  first on the camera, and there was a chilly wind, so I tried a couple of shots and came back inside.

This is one of the exits from the carpark under the building.  It is accessible only from the inside as the fire escapes lead to the car park.  I took this mainly to see if I could remember what the dials meant on my Fuji camera.

I have done no knitting.  It would have been useless and would have needed ripping out.  I had planned this year on the craft show in town but could not face the effort to get there.  I heard from the president of the NSW Knitters' Guild that there was almost nothing for knitters.  I was glad I did not go.  My hip aches and hates stairs and I  had enough germs of my own without sharing them  or those of others in the crowd. 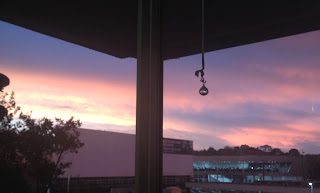 Here is a picture from my phone.  The old saying goes along the lines of "red sky at night, shepherds' delight.  Red sky in the morning, shepherds take warning."  After a day's rain, there were just a few moments of sunshine right on sunset.  As you can see, lots of red sky.  The saying did not work.  The next day was very wet. 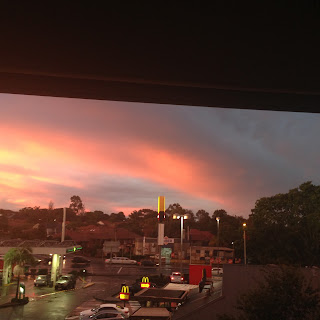 This was taken from inside, looking out to the north west.  Lots of red there.The thing hanging is a crystal mum gave me years ago.  It is in the sun in the morning, that's if there is any, and the crystal splits the light into flashes of its component colours.

This is  another photo taken just a couple of minutes later.  As can be seen, lots of heavy cloud and the heaviness won out over the sun.  The following day was wet.

One of these days, I will return to knitting.  Two hats in as many months is not a good record.

This time a year ago we were planning Big Sister's twelfth birthday party.  Her mum had refused a party for any of them for several years and we had a big one at a park.  She turns thirteen in a week, but this weekend is son's turn to have them.  Because of the uncertain weather, they are doing something different.  A much small number of girls is  going indoor rock climbing this weekend.  She is looking forward to it and will be good.  She is athletic in build but her mind sees pathways and ways to go.

She is halfway through her first year of High School and loves it, especially Science.  A lovely girl, usually bright and cheerful and very helpful.  I have  several SMS messages  sent from son's phone by her.  Each ends LOVE, T.
Posted by Jan at 2:30 pm