I guess that the new year is as good a time as any to try again.  The last two years have been rough, very rough.  My energy has been sapped for various reasons and blogging was one thing I let slide.  Knitting was another.  Photography yet another, even using phone.

However, it seems as if things are looking up somewhat, so I shall try again.

We received the most wonderful Christmas present ever.  Three weeks late, but most definitely better late than never.

A few days ago, Miss M was officially declared to be in remission from the ALL, acute lymphoblastic leukaemia.  She had what we hope will be the last lumbar puncture less than a week ago and then remission was announced.  This means monthly checks for now and checks will continue for very many years more, well into adulthood.  But right now, it means no more chemo.  After the intense chemo in hospital for months, she moved to daily chemo, often half a dozen different tablets at night.  She was meticulous about these, could tell you about what each did, were they to be taken with or before or after food etc.  All gone now.  The chemo had nasty side effects apart from the hair loss.  Arthritis which put her in a wheelchair for a long time, pancreatitis which was very painful, diabetes for a long time.  All from the chemo.  The policy here is to hit the leukaemia hard and to then deal with any side effects. 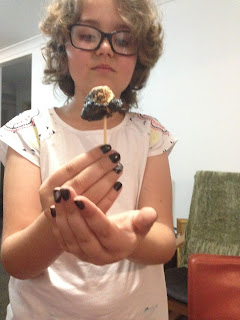 Outside the oncology wards at the Children's Hospital there is a big bell.  Similar practice worldwide.  The bell is rung by the patient to signal remission.  She rang that bell hard.  I do have pictures but  imagine an 11 year old beaming and swinging the rope hard.  Pictures are Facebook and I would rather not use son's account.  However, we are rejoicing in this and are very, very grateful.

This picture here is a bit older.  Hair grown back.  The gooey mess is a marshmallow toasted over a tealight on my balcony.  Four of them, around the same age spent an evening doing this .  Each had skewers and  a tealight candle.  They spent an evening toasting a large bag of marshmallows. Next
morning I found a sticky mess everywhere.  On balcony tiles, all over table etc.  But they had fun.

There has been much more.  Son has been divorced, a nasty drawn out process with much acrimony on one side.  Just horrible.  The house was finally sold, settled on a week ago, with a much better price than had been suggested when they tried to sell three years ago.

He has met a lovely woman with two children of her own.  This was a year ago.  In a couple of months they will be married and both seem very happy, working at making the children from both sides to be part of a family.  They all attend the same school but much to Miss M's relief the other 11 year old will be in a different class to her this year.  They have been in same class for the last two years.

I have not been well, stress I guess.  The arthritis has been nasty and I have torn ligaments which connect the pelvis to the hip.  This has meant that the left hip is basically unsupported and I am very insecure when walking.  I used a stick for a while, but physiotherapist insisted on a frame when she saw how my back was twisted to compensate for the lack of support.  I told my family they were not to laugh, but they have been very supportive.  Progress is slow but I do try to use it every day.  There is no real prognosis about recovery.  It may happen, may not, but won't be quick.

I was pushed heavily by an overseas student getting in the train when I was going to central coast.  He was desperate for a seat for a few minutes.  I felt something go then and the pain was terrible.  I then stumbled a few weeks late on steps in a house I had never visited before.  It was dark and the verandah light did not shine on the steps.  An old house, they were uneven and I could not see that. There was no rail to hang onto.

Knitting has been very spasmodic.  I do hope to remedy that with some sock classes on Craftsy from Lucy Neatby.

My son who lives here badgered me into visiting a local audiologist.  I knew I needed new hearing aids , but the place I went to for years was inaccessible.  In George Street in the city, all torn up to lay rails for light rail.    No buses down George Street at all.  Eventually I rang local place and discovered that what I thought would be difficult was actually super easy.  A government initiative which works.  I told them pension number, they were able to see my records of last eleven years.  They swapped account to them, and emailed the former place to tell them I could not physically get there.

The guy was wonderful, tested everything and I now have new aids, the best I have had yet.  The others were very uncomfortable, these are never felt except when I insert them in the morning.  I can hear properly and the tone is amazing.  I know there are constant advancements in technology but the difference is amazing. 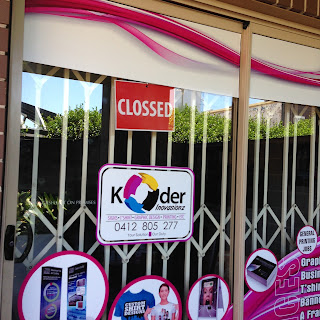 More than enough written for a comeback.  I will leave you with a picture of the printer's shop newly set up downstairs in a long vacant commercial unit.  Somehow, I get the idea that I would not patronise this place.
Posted by Jan at 11:42 am 3 comments: