Two posts in a week! Still no knitting to speak of, but some yarn I bought has just cleared customs today, so hopefully the next post may have something to show. 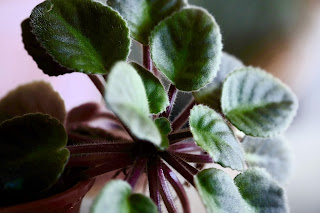 I have never though of myself as someone who grew African violets.  Mum was not a gardener, although she had good ideas for layouts and choice of plants, but gardening?  Not her thing.  However, she had numerous African violets and looked after them well.  There were nearly always blooms on most. I loved fresh tomatoes and more from my garden.  But African violets were not my thing at all.  Still aren't really. However my eldest son was given this one way back when we lived at Killara, possibly 2016.  I have no idea why he received this as a present.  He offered it to me to take care of.  It is still alive and at times it even has a mass of flowers.  This was taken quite early in the morning so light is dark. 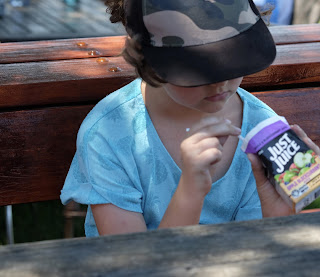 Here is a picture of Miss M, still on chemo, but taken not long ago.  Our family Christmas was held at the polo grounds at Richmond.  It was very hot although we were able to both park in the shade of some enormous old trees and to drag tables and seats from clubhouse to the shade.  My niece is a polo addict, has a couple of ponies, although at three years into the game, she is still really a beginner.  She spent time in Argentina this year and went to games with the national team.  She had lessons and went to Patagonia up in the mountains and rode with the gauchos there.  She had a wonderful time and her photos are just amazing and breathtakingly beautiful.  She plays here regularly and is a member of the club.  We had the place to ourselves.  It was around 40 deg. C, but we were fairly comfortable. 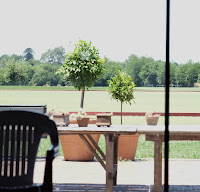 Here's a photo looking from inside the clubhouse outside to playing field.The young ones had mallets and whacked balls around the field, although they gave up on that one in the heat.  They sat astride practice horses made from 40 gallon drums, mounted on a frame.  My niece set up the sprinkler and they had a good time getting cool there. 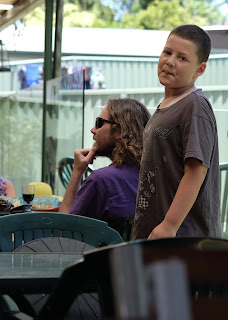 It is a bit washed out but looked like this after several very hot days.  We had the place to ourselves at the end of a private road.  It was convenient as far as family here and there was concerned and a good time was had by all.

My son and his fiancee held an engagement party just before Christmas.  At a friend's house where there was a pool.  Again, another hot day but all the children.  This is my youngest grandson, there is now another girl younger than he is, and another boy the same age and class as Miss M, at the same school.  Much to their delight, they are in the same grade but different classes this year.  High school next year.  Miss M seems to be coping, she is  quite bright and seems fine despite the huge amount of school she has missed  in the last two years. She is, however a "blonde bubblehead" as an aunt described her many years ago.  Lives in a daze, except for where she is really interested in something, like Star wars lego.

My son lives  on the Central Coast overlooking Brisbane Water and they come down reasonably often by train.

Finn is a big boy, very solid and loves lego, bike riding, dismantling the bike he wrecked when he hit a pothole. 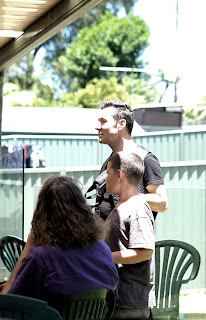 He is also a good cook who enjoys various dishes but is especially is good at Anzacs and BBQs.  I printed out and bound the favourite recipes from my original folder.  I gave a copy to each son and Finn now peruses it often to choose something new to make.  He is 10.

The person behind Finn  is his Dad, my youngest son.Last in this assorted post is another photo.  Finn, his dad and my middle son, newly engaged.

Again another hot day with strong sunshine which sapped the colours around.  It also sapped my energy, although those in the pool seemed to have boundless energy to jump in and out, chase each other, play with a ball and so on.

As always, photos can be enlarged by clicking on them.

I'm glad to see you back here Jan. I'm so happy for your family, that is the best news about your granddaughter.

I hope your recovery process goes smoothly and you are pain-free sooner rather than later.

Good news about the hearing aids too.

What a lovely idea to give Finn a recipe book, he'll appreciate that all his life. I really appreciate my family recipes. Also, how cool to have the same name as Finn in Star Wars!! Glad you can mostly bear the heat, it is very draining. My mum is, and nan was, great at growing African Violets, actually growing everything. I did not inherit the growing gene.