I could get into blog after over a year, but my goodness, it looked strange.I have been thinking about resuming for a while and had decided a couple of days ago that I would try to post just once a week, at least for a while. More than that may be a bit too much to ask.  Life just has been in the way. 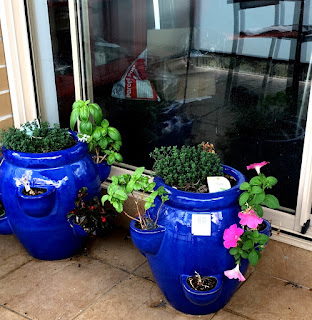 Now to see if I can still load photos.  The little petunia with the bright pink flowers is a survivor.  Most annuals bloom one season then die.  This has already flowered last year and died right back.  I noticed last week that there were fresh leaves and on bud.  There are now four flowers and more buds, so definitely a survivor.  Perhaps my blog is too.

The small basil in the same blue pot is also a survivor. In many years of growing basil, I have never had it survive over winter.  Two plants saw winter out but this particular one was eaten back to the stem, not a leaf left.  It too has recovered.

My famliy is well.  Miss M still has regular checkups but is till officially in remission fro the acute leukaemia.  The children's hospital doctors hit it hard with chemo, then deal with the side affects if any.  She developed diabetes, pancreatitis, arthritis, all from chemo, but now these also also in remission. She is in her first year of high school and has been almost two terms without days off for illness. Do you know the best part of high school?  No question about it.  Lockers!

My arthritis comes and goes.  Very bad yesterday, OK today. My hip is recovered from the torn ligaments which left hip  joint floating without support, but I still have trouble walking without support.  A lot of it is in my head, so I am working on that too as well as on physical progress.

My son remarried some time ago so I now have seven grandchildren, not five.  They were a bit bewildered particularly the one the same age and school as Miss M. A blended family has ups and downs and the downs were not helped by diagnosis of epilepsy and a sensory processing disorder. 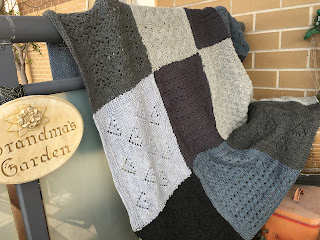 I have been fairly monogamous in my knitting.  There have been a few hats and scarves, one set being sent to France where the elderly owner of a B&B, where son and his bride stayed a few nights on their honeymoon, had a hat nearly falling apart.  More holes than knitting.  This was up in the mountains.  Son and bride hired a Renault from factory in Paris and spent a month driving, across to Mont St Michel, down to the Mediterranean and across, then up almost to Strasbourg and thence back to Paris.  They loved it and have some amazing photos from the trip.

Last summer I made this rug.  It is sixteen squares.  I loved the variety but it took me two days to sew together and I had a sore back from hunching over it.  It is made with Cascade 220 and has been great thrown over me for an after lunch nap in the winter.  It is large enough to tuck around me and is very cosy.  The squares are different.

I had plans for a fancy shawl from Malabrigo, a new order from a yarn shop.  That was to be my winter project.  I have heard nothing of the Malabrigo.  So I started another rug, a present for new daughter in law.  It is made from Cleckheaton Californias, Bastille name of colour.  I am using the ten stitch blanket pattern, easy but ever so boring.  Ten stitches in a strip which every two rows is joined to the  blanket body.  At the corners I have the excitement of a mitred corner, then back to the strip.  I have used about half the yarn, knitted on 6 mm needles. 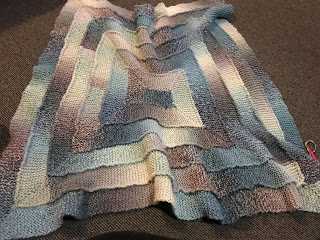 Did you know Bendigo Mills have bought out Australian Country Spinners?  That means brands like cleckheaton, Patons and others have been taken over.  Bendigo says it will continue them.

This California was probably not a good choice for the rug.  It is basically thin roving, so little stitch definition.  It is very cosy, now big enough to spread over my lap and tuck cosily around me as I knit outside in the sun on the balcony.  Being up high has been chilly over winter as there is quite a breeze, more like a gale at times.

This was the first time I had seen the the rug flat, well sort of flat.  I have added about three more strips around it.  Obviously some blocking is required.  However, it was bigger than I expected.

Till next week (I hope.)

Welcome back to the blogging world!! I did know that Bendigo has bought ACS. I hope nothing changes too much. I love the idea of the ten stitch blanket but I am too lazy to every make one!! Love the colours. So glad to hear that Miss M is doing well and cross to read that you are not. Maybe the warmer weather will help? Though the ups and downs of Spring can be a trial for a Labrador with arthritis. The blue pots are so vibrant and it is good to see the plants are doing well.