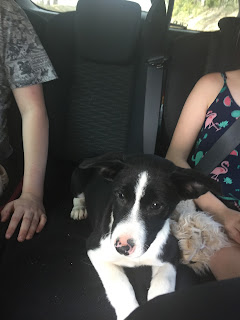 I distinctly remember the book called Milly, Molly,Mandy, being used as a supplementary reader when I was in second class.  I finished it in under the time allotted on one Friday afternoon for such activity when several weeks were set aside for it. I read it all in one afternoon and was bored stiff by it.   I did not like it as it was very "soppy" and totally unsuited to Australian conditions and customs.

My second class teacher was at a loss as to what to give me.  Problem solved.  She would bring in the Anne series and bring a new one to replace the finished book.  I worked my way quickly through the series, so so she went on to the Billabong series by Mary Grant Bruce.  More books from her childhood collection followed.

All this is to introduce Millie.  My son and two of the five children drove to Cessnock in the Hunter Valley at the weekend to collect her from her first home, a sheep farm.  They use Border Collies there and sell the ones they do not need.  Pedigreed but no papers, which is fine.  Isn't she cute.  A twelve week old Border Collie, already able to follow a few commands like sit, stay and she loves playing with a ball.  She is settling in well and is happy there, away from her brothers and sisters.  The same can't be said for Jenkins, the cat from the rescue society which they have had for some months now.  He is not a kitten, possibly a couple of years old.  He has been insulted by the newcomer.  I guess they will settle down soon, once his dignity forgets it has been affronted by such a young puppy.

Milly still needs the series of vaccinations to be completed so she cannot yet go on walks outside.  However, their back yard is enormous , so she is practising walking on the lead out there.

It has been an up and down sort of week.  Not much knitting done as my right hand has had several painful fingers and a very sore thumb from arthritis.  I woke one morning to find hip and knee were just fine, but fingers were puffy, distorted and very painful.  I have balcony doors on one end of my kitchen/living area.  At the other end is the kitchen. Over the sink there is a hopper window opening onto the walkway outside.  It has been closed for months as quite a lot of cold air comes in.  However, spring has sprung up here and I wanted the window open.  My sore thumb just would not co-operate in winding out the handle to open it.  It is hard enough as I am short and have to lean over the sink and reach up at the same time.  When my grocery order came from Colesworths, I asked the driver to open it for me.  twenty seconds and the deed was done.  Their drivers are very helpful, always polite and cheery and pleasant to deal with.  Unlike the drivers from the second part of than combined name who are not punctual and are often surly.  The open window is now pleasant and keeps the place well ventilated.

I have been eating a low carb diet for a year now and have lost a lot of weight and several dress sizes too.  I am not fussed if occasionally I have carbs, but generally don't at home.  Cream and butter and eggs and proteins and lots of vegetables.  I am rarely hungry.  This week I have bought some more clothes.  Summer things as much of what I had was old and really well on the way out, apart from being miles too big and falling off  my shoulders. 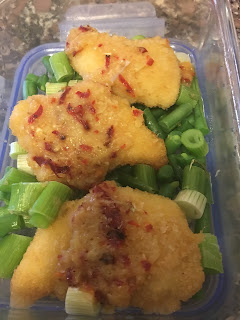 This was dinner last night with more vegetables as well.  Chicken tenderloins baked.  Then I spread them with a paste of ginger, garlic, lemon grass and chilli.  The green is spring onions and chopped green beans.  I really enjoyed my meal.  Eating low carb is fairly easy and I enjoy lots of yummy things.  Tonight is the last of the tenderloins, with a mushroom sauce and I will add some cream to the sauce before serving with a salad. Soups featured fairly heavily in winter and I enjoyed them.

Breakfast is occasionally Greek Yoghurt.  I buy a kilo tub of it from Tamar Valley in Tasmania.  Thick and creamy and I enjoy it.  Otherwise eggs feature heavily often with good streaky bacon or perhaps scrambled with smoked salmon and cream .  Despite cream and eggs and butter, my cholesterol level is well down on the scale.

I make an enormous salad for lunch, more than a day's allowance of vegetables in just one meal.  And some protein, cheese, perhaps cold meats or sausages, or a tiny tin of tuna in oil.

I must say it is pleasant to have people barely recognise me if I have not seen them for a while.

Oh welcome lovely Millie, what a gorgeous girl she is. The Labradors are a border Collie friend and he is very clever and obedient and loves to run and play. I read those books too, we had Wide Range Readers and we would sit in our desk and every child would read one paragraph. I had read the book too, luckily when I was ten my dad ‘encouraged’ the Town Library to issue me an adult card so I could borrow TEN books. Yum, that looks a delicious meal and well done on gaining health!