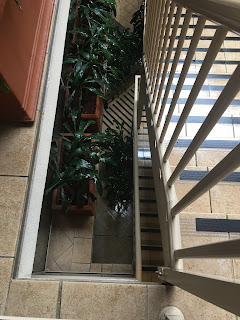 In two months Sydney had only 2 mm of rain.  Shrubs and plants here were showing signs of stress.  The we had rain two days ago on Friday.  Forecast had promised it many times but nothing happened.  Further west towards Broken Hil and in other pastoral areas there were good falls, but nothing here.

I was going towards lift to collect mail downstairs when I looked over the edge of the rail.  The plants downstairs were shiny in the rain, and the angles of stairs, rails and tiles made an interesting composition.

Today is Sunday.  The morning was pleasant and sunny but rain was forecast in the afternoon.  Twice in a row, the forecast has been correct.  It has been raining here now for about an hour.  Days more needed but anything is better than nothing. 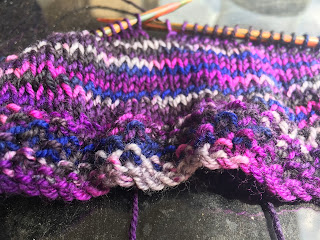 I should have fiddled with this a bit, I see.  This is Three Irish Girls, fingering sock yarn.  Colour is called Purple Rain.  It is really quite a bit darker than shown here, almost black. I was sitting at black glass table outside and had to change positions as the deep purple against the black glass made the stitches next to impossible to see.  This will be a plain cowl as a Christmas present.  I found some simple but effective patterns on Ravelry for cowls but when I started, I thought that I would let the wool speak for itself in its gorgeous colours . Moss stitch border and stocking stitch, knit in the round on circulars.

So what has happened to my ten stitch blanket?  On having a good look at it I found a nasty mistake I had made.  The corners are mitred with two sets of short rows.  Somehow on one corner, I had omitted doing the second set.  Instead of a sharp right angle. I had a floppy piece of fabric and no real corner.  I thought for a while that I could fudge a fix, knowing full well I would never be satisfied with the fix.  I ripped it back and have possibly a month's work to get back on track.  The rug is currently stuffed into a Coles shopping bag in time out. The change from lightly spun thick roving to light gingering weight yarn has taken some time to adjust to. 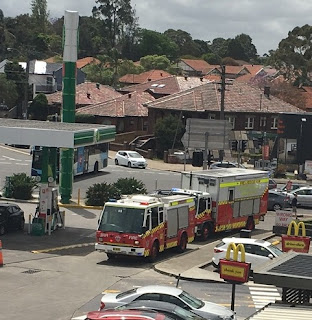 This too far away to be  really
clear.  I was not sure how long the fire engine and the larger Rescue Unit would be here.  I could here them screaming up the main road outside for several minutes.  All sorts of emergency vehicles go past here.  To my surprise they pulled in here and seven firemen emerged.  There have been a couple of emergencies in the years I had been here with LP gas filling, but nothing seemed to be wrong.  No smoke or panic.  They pulled in almost completely blocking the way in and the entry to McDs drive through lane.

A folded ladder which would access about twelve feet was taken from the smaller appliance.  I wondered if a cat was stuck in the huge Moreton Bay fig tree but that seemed fine.  McD's roof blocked my sight.  I think that some one or some animal was caught in the stormwater canal next to the big tree. A police car pulled up and the two policemen from it joined the group.  After about 30 minutes they all returned, packed things away and left.  I have no idea what was wrong.  The canal is very wide and was deepened some years ago after it flooded further back.  It always has water in it, just a tiny stream in the middle. Just after engines and police car left, another police car arrived with sirens screaming.  Just a tad late.  I'm glad they were not needed.

This one is a mystery.  A year ago I was plagued by pigeons nesting on my balcony floor.  DIL and I removed seven makeshift nests before eggs were laid.  A couple of years ago I did have eggs hatch and nestlings died.  Urk. 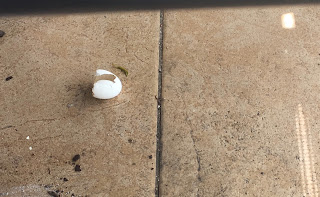 I had been determined I was not having that occur.  DIL installed plastic bird spikes under the balcony rail as that was how they approached here.  Planter boxes outside had metal spikes around the edges and lengths of what looked like enormous Slinkies were also installed.  I was not popular with strata manager who said people might downgrade the place because of this. I insisted I was going ahead and how could it not be downgraded with green, slimy, disease carrying droppings all over the floor.  She gave way and further bigger activities are being carried out against the pigeons which are here for easy food from McDs here and KFC and Burger King down the road.

This morning I found half an egg shell under my outside table.  There have been no signs of nesting, no sounds of baby birds and no parents flying in with food for babies.  Just a mystery.

Wow, it is mysteries all around at your place. We heard a lot of emergency vehicles heading north yesterday but there was nothing on the news either. Maybe a bird of prey dropped the egg? Birds come inside here, and we have to wave things about to be the, Out. Oh that purple cowl is going to be lovely, the colours do speak for themselves. What a pain in the neck to have made a mistake, I hope the knitting in the bag is having a good thing about it’s behaviour! I expect you will feel in the mood for it again. Glad you have had some rain, I love th smell of rain about to come and then after it has fallen.