so just what was the question? 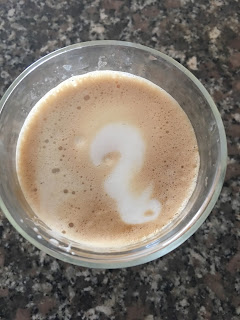 I rarely fuss with coffee art but this question mark formed itself on top of my second cup of coffee this morning.  I am not at all sure of just what the actual question is.  There are several I could think of and and I have no ideas of the answer.

Will this be the last back operation my son needs?  I am sure he would like to hear that this has fixed the problem.   He has had several over the last few years and eventually had an electronic impulse generator inserted in his lower back for nerve pain.  It worked well,  but his body was very unhappy with the implant which was about the size of two matchboxes.  His muscles would spasm uncontrollably and the pain was intense.  It was removed three days ago and he can feel the muscles slowly unraveling from the contortions the spasms had forced.  A couple of other procedures were done at the same time.

All of us would love to see an end to the torment and pain he has had . 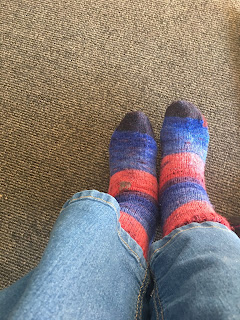 I dug out these socks one day last week.  They were one of the first pair I had made.  I am not hard on socks, rarely get wear holes in the usual places like heel or toe.  These have a couple of darns where I snagged them on something and a hole developed.

They are very cosy and I love them still.  While  have socks from several brands of very expensive yarn, I can't level that charge on these.  They are some of the first sock yarn I ever bought.  Lionbrand, bought from a distributor in Melbourne.  The name of the retailer has completely slipped my mind.

I am a bit of a yarn snob, never use acrylic as it hurts my hands and fingers.  They can hurt by themselves without any extra incentive.  Some yarn I won't use.  Opal and Noro both inflame sore fingers, although I love Noro colours.  Opal feels like binder twine as it passes over my fingers, although the socks wear well. 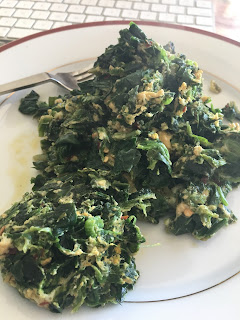 As Cindy at 2paws says, I have not just lost  a lot of weight but have also gained health.  25 kilos and if I applied myself a bit more, more would go. I have been eating low carb, high protein.  It suits me.  Lots of green vegetables, quite a bit of fish, salad etc.  With protein and fat , I almost never feel deprived or sorry for myself and am not hungry. Occasionally I will have some bread or a wrap, but not often.  I haven't bough biscuits or similar in ages.

This was breakfast a few days ago.  Spinach and egg.  I have been buying frozen spinach as it comes in a neat pack, not a huge bunch.  This brand is from Coles and is called Natures Nutrient.  $1 a pack of 250 gm.  I like it much better than the pellets of the much dearer brand which I would put in casseroles etc.  This tastes like fresh, without the fuss.  I heat it slowly in butter, add herbs like dill, add some chilli, often quite a bit, and then gradually stir in a couple of eggs.  It may not look appetising but with the chilli and fresh spinach, it tastes good and is easy and quick for breakfast.  I surprise myself sometimes.  For many years, breakfast was coffee.  Then I graduated to toast or cereal, now eggs often.  Leftovers are used at breakfast or deliberately cooked to have with an enormous salad at lunch.

Depending on clothing brand, I have gone down five or six sizes and some cheap, make-do things I bought last summer are now falling off my shoulders. I deliberately bought cheap and they have done what I wanted them for.
Posted by Jan at 9:10 am

As a tea enthusiast I envy your coffee art! Oh I do hope it is your son’s last operation too, he has endured so much over the years. Congratulations on gaining health and I disagree, that spinach looks delicious! If not liking acrylic means you are a yarn snob, I am one as well. There is something so nice about a familiar and comfortable piece of clothing. 35*C, waaaay too hot. Keep cool!