A better week this week than previously. Son is improving, dressings have been removed, medical staff happy, son is happy, hydrotherapy to start soon. Mum happy too.

The theory is now that they knew impulse generator worked as he wore it strapped on externally for several week as a trial before implant.  However neurologist and pain specialist suggest that after the implant the body reacted and things tightened up while ever it was inside him.  It was suggeted that the technology was fine but that son's physique did not suit.  He is built like a bean pole and there was no cushioning fatter layers.  Every time he moved, it rubbed on parts of his internal physique.  Apparently someone his height in USA would very likely be 20+ kilos heavier and gadget would be cushioned.  The more it hurt, the more the muscles tightened, a vicious circle.  It will be a slow job as they relax the grip they have had on him for months and his body can straighten up.  Even now I can see not only an improvement in walking but also I can see he has gained back some of his height.  This will also happen over time.  I can hear how much better he must be feeling when I listen to him talk.  Voice is clearer and best of all, the dreadful medications have been decreased.  Just a bit, but decreased.  More decreases will follow and he will hopefully be weaned off the nasty stuff. 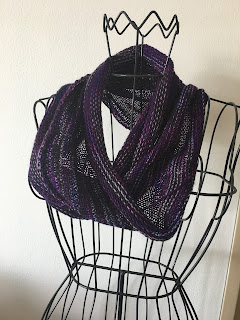 Once I heard him speak and saw how much better he was, I relaxed, even where i did not realise how tense I was.

I have finished the plain cowl for a Christmas present made from Three Irish Girls sock yarn.  Pleasant yarn to knit with, soft and easy on the fingers.  I bought mine from The Convent and Chapel yarn shop at Rylstone in NSW Central West, between  Mudgee, Lithgow and Bathurst.   Lovely ladies, Gemma and Margot, who have gone out of their way to help me finding some yarn and suggesting colours for another project.

The photo shows the plain cowl with moss stitch border for a Christmas present.  I doubt family reads here but I will say no more on details.  My naked lady , once an embarrassment to my grandchildren, has a warm neck.  It is looped twice here and I have also tried it twice around my neck.  That worked quite well.

After lunch I will wind some more of the yarn and start on the second.

Only a few more days and it will be December.  An eventful year for most of the family in one way or another.
Posted by Jan at 12:11 pm

The relief for your son must be wondrous and for you too. The only way is up. I am glad to see who the naked lady is!! Lovely cowl, and yes, not long until December....