It was at the beginning of the year, possibly February, that I decided I wanted to do the Durrow Shawl by Lucy Hague as a winter project.  Lots of concentration needed and winter would be a good time to do it.  On the same day, a yarn shop with whom I had dealt before announced that they were putting in an order for Malabrigo sock yarn the very yarn suggested in the pattern.  So I put in an order and waited.  And waited.  I sent several emails which were not answered and finally I was told that Malabrigo takes orders and fills them as they have the yarn.

Nothing happened, no yarn , no news. Winter came and went and still no yarn. I had told the shop that this was a firm order so thought all would finally be well. 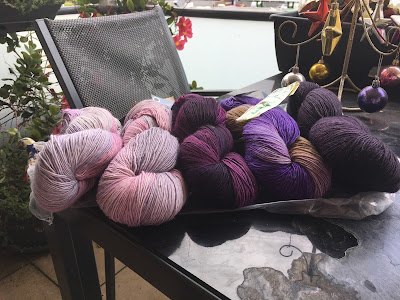 Then after a couple of orders, I had a look at  Convent and Chapel Wool in an old building in Rylstone, with wonderful yarns.  I had dealt with them before and been impressed by their range and pleasant service. We had a lot of email and phone discussions and they sent me some ideas and suggestions.  I made a choice and they sent it off.  My son who now collects parcels for me at his work brought it down last night.  I am thrilled with it.  The colours are different to what I had ordered of the Malabrigo, but they are lovely.  I think the third and fourth skeins should be swapped around.  I did make a record of what I was ordering and how it corresponded with the original pattern but I did not look at it when I placed these on table.

Here is a link to this variety of yarn from the shop, Hand Maiden Merino Slim.  An enormous range of colours can be seen from the dropdown box.

My original order? I had been hopeful for months and even after buying this new lot of yarn from Margot and Gemma, I would still have bought the other if it had arrived.  I had said it was a firm order and I would have kept my word.  That shop closed today.

Yes, I agree about the swapping around of 3 and 4. How very disappointing, I would rather be told no, than kept on tenterhooks. But how lovely that you had wonderful service and gorgeous wool regardless!